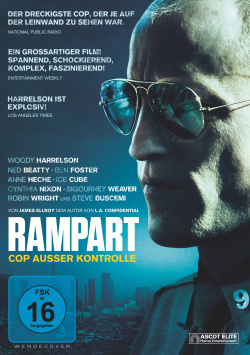 Rampart - Cop Out of Control - DVD

Movie: Officer Dave Brown (Woody Harrelson) is truly not what you'd call a model police officer. He drinks, likes to pop a pill or two, is as quick with threats as he is with his fists and occasionally his gun. But as much as his behavior is a thorn in the side of Internal Affairs investigators, there's no denying that Brown's methods are effective. He keeps the streets of L.A. clean, and to do that, it's okay to go outside the rules. At least that's how the cop sees it, though he gets in a lot of trouble when his assault on a suspect is filmed one day and broadcast on national television. Since the Los Angeles Police Department is struggling with its image anyway, it can not use a brutal cop like Dave so not at all. But Dave is not so easily dissuaded from his ideals...

Rampart - Cop out of control is the second collaboration between director Oren Moverman and leading actor Woody Harrelson after the drama The Messenger. Once again, Moverman does a great job of getting a particularly intense performance out of his leading man. And that's all the more admirable since Dave Brown really isn't a particularly sympathetic character. Rather, he's a completely broken guy on the inside who wants to realize his ideals, which might not be so wrong at heart, at any cost, even if it means breaking the law he's supposed to represent. There's a good reason why the story is set in the 1990s. Because even though the film is not a direct rehashing of the so-called Rampart scandal, in which over 70 police officers of the Rampart District's Anti-Gang Division were accused of professional misconduct such as inappropriate violence, drug abuse, assault or corruption, the title alone of course alludes to that messy chapter in the LAPD's history.

Dave Brown ins quasi the epitome of all those officers who have put themselves above the law in the most densely populated area of Los Angeles, with nearly 400,000 residents in 20 square miles. What makes his character so interesting about this is that he is convinced he is doing the right thing. He doesn't care if his superiors and colleagues like him, he even puts up with his ex-wife and children hating him. The main thing is that he can ensure safety on the streets of his district.

In a rather sober-looking production that is repeatedly bathed in rather undercool colors, a great ensemble of actors act their way through a story that, after a strong beginning, has no real highlights to show for the second half. The interesting premise Moverman sets up at the beginning and the strong characters he establishes in the process develop sluggishly after a certain point. True, the whole thing is still extremely watchable even in the weaker second half thanks to Woody Harrelson's strong acting. But from a script on which James Ellroy (L.A. Confidential, Justified), a specialist in high-quality cop thrillers, has personally co-written, one could have expected quite more dramaturgical highlights.

But despite its weaknesses in the story and despite the not exactly sympathetic main character, Rampart - Cop out of Control has nevertheless become a strong cop drama worth watching, which falls short of its potential given the talent in front of and behind the camera, but in the end has enough convincing power with its positive aspects to be judged worth seeing.

Image + Sound: The DVD's image captures the undercooked atmosphere of the drama well with its color scheme. Overall, both the image sharpness, detail presentation, and contrast matching love at a good level. Since the drama is primarily told very quietly, restraint tends to dominate the audio as well. Every now and then, however, some well-used surround effects can be made out, which come across a little more powerfully in the DTS mix. Good!

Extras: Besides a short montage presented under the title Sh*t Dave Brown says, the DVD still has a good making of (about 30 min.) and some promo interviews, as well as the trailer for the film and more program tips to offer. Good!

Conclusion: Rampart - Cop out of Control is a good cop drama that dramaturgically degrades a bit in the second half, but overall leaves a positive impression due to the good ensemble and the outstanding lead actor. This is also true for the DVD transfer, which can convince both technically and with regard to the bonus material. If you can get by without a lot of action in this genre and anyway place more value on the performances of the actors, you should definitely check out this home cinema premiere. Recommendable