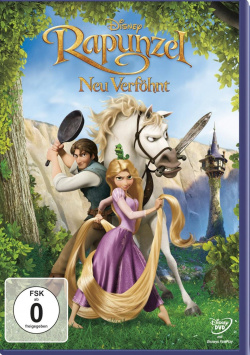 Film: What would Christmas be without a new Disney film in the cinema? In 2010, the Mouse Company once again brought an animated film to our movie theaters, combining traditional Disney magic with modern 3D technology. And even after 50 feature-length animated films, hardly any of the typical Disney magic seems to have been lost, something fans can now convince themselves of in home cinema.

In the newly spoiled version of the fairy tale Rapunzel, the story is told of the smart robber Flynn Rider (voiced by Moritz Bleibtreu in the German version), who has just stolen an expensive crown from the royal palace and managed to lose his two accomplices. On his escape, he comes across a hidden tower - actually the perfect hiding place from his pursuers. But once inside the tower, Flynn has a painful encounter with a frying pan wielded by Rapunzel (Alexandra Neldel), a girl with long golden hair who has been in the tower with her mother Gothel since time immemorial and has never left it in her entire life. Flynn's appearance brings the great opportunity: she offers to let him go, along with his loot, which she has safely hidden while he was unconscious, if he will accompany her to freedom just once. For Rapunzel has a great desire to see up close, for once in her life, the beautiful lights that rise into the sky every year on her birthday of all days. What neither Rapunzel nor Flynn suspect: the lights have a very special meaning, which is directly connected to Rapunzel and her golden hair...

Rapunzel - Newly Spoiled! is a real hit. On the one hand, the film is technically on the most modern level. The computer animations are wonderful and come off well even without a 3D effect. On the other hand, the film seems somehow old-fashioned in a pleasant way, bringing with it all the set pieces that have made Disney's animated films so successful for decades: a fairy-tale story, of course, with a beautiful princess and a smart hero, lovable animal companions, lots of catchy songs and child-friendly humor without big rough edges. The very free interpretation admittedly no longer has much in common with the classic fairy tale of the Brothers Grimm, but that doesn't really have a negative impact.

On the contrary: even if the framework of the story is familiar and familiar, the film as a whole seems fresh and charming. It's clear to note that John Lasseter, one of Pixar's most creative minds, had a hand in this as a producer, bringing a bit of the genius that still seems fresh to Disney even after all these years. While the characters are drawn to clear Disney specifications (both figuratively and literally), they still don't come across as fuddy-duddy or unimaginative, just charming and endearing.

The same goes for the songs (though this review refers to the original English version), which were penned by Alan Menken (Ariel the Mermaid, Beauty and the Beast). Yes, the songs are very cheesy at times, but that's just the way it has to be. The songs are all catchy and fit seamlessly into the action, becoming part of the story. It's nice to see an animated film again where not all the characters end up dancing to a modern pop song, but for which new songs have been composed in the best Disney tradition. And even if many children are no longer used to these musical-like interludes - perhaps one reason why the enchanting Kiss the Frog did surprisingly poorly - Rapunzel - Rewired! can rightly be congratulated on the fact that the film managed to storm the cinema charts worldwide and bring in over 600 million dollars. Even if Disney's animated films are not the most original and there are now many animated works that are more clever and appeal better to older audiences, films like Rapunzel - Newly Spoiled! with their childlike naivety are simply wonderful and should remain with us as long as possible. Because alone such incredibly funny characters like the chameleon Pascal, blessed with a great protective instinct, or the dutiful horse Maximus make the film - not only for children - absolutely recommendable. Absolutely worth seeing!

Picture + Sound: As you would expect from a Disney DVD, Rapunzel once again meets the highest standards. The picture is absolutely clean, the colors wonderfully matched and the sharpness can convince in the smallest details. The sound has in addition to the music and the dialogues also a few nice surround effects to offer, so that there is also no reason to complain here.

Extras: In contrast to the neatly equipped Blu-Ray, the DVD has only two short extras on board. First, two alternate storybook-style opening sequences are presented. These short sequences are in unfinished form and last just under 4 minutes each. The second extra is a two-minute journey through 50 Disney animated films. Beautiful, nostalgic, but very, very short. A couple of trailers round out the offerings. Meager.

Conclusion: Rapunzel is pleasantly old-fashioned Disney fun, combining modern computer animation with the old-fashioned charm of old Disney classics into a well-behaved but still very entertaining whole. The DVD is technically convincing in every respect, but if you're hoping for extras worth seeing, you'll have to go for the more expensive Blu-Ray - which is also available in 3D format! But no matter in which version, Rapunzel is absolutely recommendable for Disney fans!