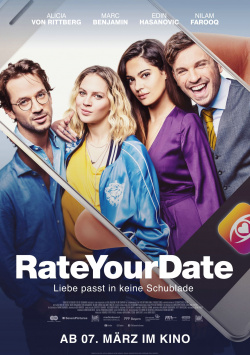 Single dating can be a real pain, especially in the big city. Especially when you go on dates and have to realize how many jerks are running around the city, always looking to break your heart. Wouldn't it be brilliant if you knew what type of man or woman was going to be sitting across from you before you even went on a date? That's exactly what dating pro Teresa (Alicia von Rittberg) and her best friend Patricia (Nilam Farooq), a single mom and hopeless romantic, have thought. When Teresa meets computer scientist Anton (Marc Benjamin) on an initially cruel date, the idea suddenly takes shape: Together with Patricia and Anton's best friend, the pickup Paul (Edin Hasanovic), they want to develop a dating app that lets all users fall into clear categories. #RateYourDate seems to be the app the dating world has been waiting for. But can love really be pigeonholed so easily?

In the satire King of Germany, director David Dietl very entertainingly showed how we are becoming transparent people through the data that we leave everywhere, partly unnoticed by us. In the romantic comedy Rate your Date, he now addresses the willingness of many people to present themselves on the Internet in a sometimes very personal way and to reveal a lot about themselves - always under the false assumption that they are moving in a certain anonymity. And he shows that people just can't be pigeonholed by a simple hashtag.

The story is told in a fast-paced and humorous way and is carried by a charming ensemble with whom the chemistry among each other is simply right. One enjoys watching these characters in their efforts to revolutionize the dating world and make life easier for the many lonely hearts in our cities. In the process, the four main characters reveal more and more facets of their characters, not all of which can be called strengths. But it is precisely with their all-too-human weaknesses that Teresa, Anton, Paul and Patricia become very endearing figures for the audience to identify with.

Of course, humour and heart are at the heart of things here. But the pitfalls of the Internet, which can sometimes have dramatic consequences, are not left out here either. One shouldn't expect a profound reckoning with internet trolls and unscrupulous big corporations. A film like this would not be the right platform for that. That the negative sides of the digital world nevertheless play a crucial role in the dramaturgy is only consistent and does not change the high entertainment value that this comedy has.

Good actors, some very funny dialogues, beautiful images from a big city summer and an atmospheric soundtrack, to which the Frankfurt musicians Namika and Chima have also contributed a song, make Rate your Date perfect entertainment for a relaxing evening at the movies. I definitely give it a #See worth!

Cinema trailer for the movie "Rate your Date (Deutschland 2019)"
Loading the player ...