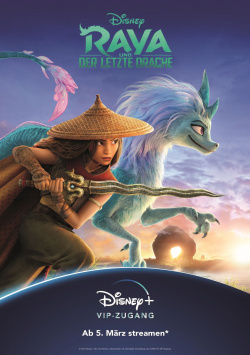 Raya and the Last Dragon

It is a great task that has come to little Raya. Together with her father, she must protect a mysterious diamond that holds the magic of the last dragon. 500 years ago, humans and dragons lived peacefully together in the realm of Kumandra. But then sinister Druun came and turned many humans and almost all dragons to stone before Sisu, the last dragon, sacrificed herself by driving the Druun away with the collected dragon magic. This event should have united the people of Kumandra, but the opposite has happened. The realm has split into hostile territories. Now, after 5 centuries, the conflict seems to have reached its climax as an attempt at a peace treaty culminates in the destruction of the Diamond and the return of the Druun. Raya wants to undo this. She firmly believes that Sisu is still alive somewhere. She sets out on a longtime quest to find the last dragon and join Sisu in tracking down the individual pieces of the diamond in order to destroy the Druun once and for all...

"Raya and the Last Dragon" is finally another Disney movie that isn't a sequel or a remake. And for the first time since "Mulan" and "Baymax", an Asian main character is at the center of a story inspired by the cultures and inhabitants of Southeast Asia. It transports the audience into a world of magic, mythical creatures and fascinating landscapes. No question: this film really belongs on the big screen. That it is denied this is a real pity, because the animation team around the directing duo Don Hall and Carlos López Estrada has really conjured up some wonderful images here, in which the exciting, entertaining, emotional and in places surprising story can unfold very well.

Raya is a very interesting heroine. She's not a typical Disney princess, so she doesn't need a strong prince to come to her rescue. What she needs are friends - and she finds them along the way, though some of these friendships develop rather unexpectedly (at least for Raya, less so for the viewer). It's also unusual that there's virtually no singing in the film, which is really a rarity for Disney. However, it's things like this that make "Raya and the Last Dragon" feel fresh, original, and extremely involving. Granted, not all elements work equally well (at least for me as an adult viewer). For example, Raya and Sisu meet a ninja baby with three fighting monkeys on their adventurous journey, which I personally found too over-the-top silly. However, I can easily imagine that the baby will be the star of the movie, especially with children. But overall, the mix of interesting, lovable characters, fascinating imagery, and exciting story is absolutely successful.

Here and there, the film is a wee bit dark, making it only partially suitable for children under 6. Otherwise, however, it is fair to say that with "Raya and the Last Dragon" Disney has once again succeeded in making a great, imaginative and, above all, original family film in which you can laugh but also cry, which is excitingly told and beautiful to look at. All in all, a clear case of: Absolutely worth seeing!

Cinema trailer for the movie "Raya and the Last Dragon (USA 2020)"
Loading the player ...