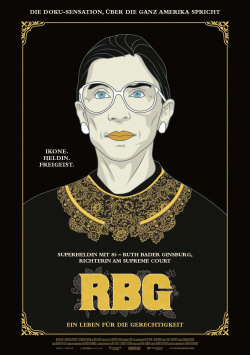 RBG - A Life for Justice

Probably few people in Germany know her name, because Ruth Bader Ginsburg as a judge on the Supreme Court, the Supreme Court of the United States, appears rather rarely in the headlines in this country. But now we too can get to know the sprightly old lady who has become something of a pop icon in America in recent years - and it's really worth it. For she has been a tireless fighter for equality and justice for decades. Time and time again, obstacles have been placed in her path, but she has never let them deter her. She is a strong-willed woman who will not be silenced even in her old age. Even from a fractured rib, the 85-year-old judge has only allowed herself to be out of action for a few days.

RBG - A Life for Justice traces the life and career of this truly extremely interesting, quick-witted and dedicated woman. From her childhood, to her college days in a male-dominated field of study, to her first dedicated fights for equal rights - especially, but not only, for women. Here, the consistency with which Ruth Bader Ginsburg stands up for her convictions becomes clear. A conviction with which she repeatedly encounters rejection and hostility, particularly in the Republican camp and especially in the Trump administration.

But the documentary also shows how Ruth Bader Ginsburg was supported by her husband Martin from the very beginning. These brief glimpses into the private life of the legal fighter are in part very humorous and at times very touching. Otherwise, the film remains stylistically rather conventional. If such a strong personality hadn't been portrayed here, the production could have quickly come across as dry and long-winded. But since the two filmmakers obviously admire the subject of their film and make the reason for this comprehensible to viewers who did not know Ruth Bader Ginsburg before, the documentary works very well.

In the end, all that really remains is the hope that RBG, as she has come to be called by her admirers, will continue to be a part of the Supreme Court for a very long time, flying the flag of reason and justice against growing odds. There should be many more people like her in such important positions! For this cinematic portrait, despite some weaknesses, there is clearly a: Absolutely worth seeing!