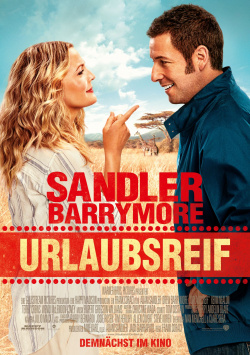 The blind date between widower Jim (Adam Sandler) and divorcee Lauren (Drew Barrymore) couldn't have gone any worse. And so they're both glad they'll never have to see each other again after that messed up evening. But chance brings the single parents back together - and on a vacation for patchwork families in Africa, of all places. In the idyll of the luxurious safari hotel, a real nightmare seems to be brewing. But little by little Jim and Lauren realise that they have more in common than they thought. And their children realise how wonderful life in an extended family can be. But this holiday holds a few more turbulent surprises in store for the two families.

Vacation Ripe is Adam Sandler and Drew Barrymore's third collaboration, following A Wedding to Fall In Love and 50 First Dates. The two have a very pleasant chemistry that still works very well in the third attempt. You can tell that the two get along well and can time each other well. Directed by Frank Coraci (A Wedding to Fall in Love), the couple is now sent on a rather mixed African vacation. Vacation Ripe is admittedly much better than recent Sandler films The Chaos Dad or Jack & Jill. And when the gags work, they're really good laughs. But the quality and charm of Sandler and Barrymore's first two collaborations is, unfortunately, far too rarely matched.

There may be several reasons for this. For one, Vacation Ripe takes quite a long time to get going. The first twenty minutes are almost completely devoid of sizzling gags, relying more on more serious moments. This may be justified in a way, but from an Adam Sandler film fans expect a gag fireworks, which is presented here initially only on the back burner. When the two families arrive in Africa, it is clearly more humorous to the point. Only, as so often, the best moments can already be seen in the trailer. The rest are rehashed jokes from other Sandler movies or gags that might be nice at first, but are just ridden to death as the movie goes on.

Another spoiler is the way too overdrawn characters. Squealing blondes and hyperactive kids aren't funny, they're just annoying in the long run. It is true that there is always an attempt to give the characters a little depth and warmth. But just because the mixture of quieter moments and the gags served with the sledgehammer doesn't really want to work, even these attempts remain ineffective. The fact that the hymn to the patchwork family is then unnecessarily drawn out until the long predictable finale doesn't really make the film any better.

No question, Holiday Ripe has some very good moments. The scene where Jim's usually tomboyish daughter Hilary (Bella Thorne) enters the luxury hotel's dining room after a complete makeover is really quite hilariously realized. And the ubiquitous singing troupe, who seem to have the right song in their repertoire for really every situation, is also quite amusing, at least initially. But overall, the good gags and funny ideas are just in the minority. Still, if you liked My Fictional Wife, you'll have fun with this chaotic family holiday as well. Not a complete hit, but also not a complete pipe burst and therefore also: still worth seeing with some reservations!