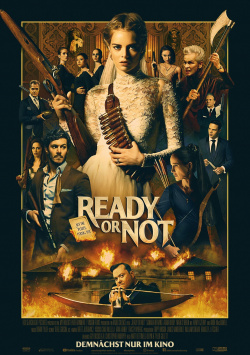 Ready or not - On your mark, get set, dead

As if it weren't exciting enough for Grace (Samara Weaving) to have found the love of her life in Alex Le Domas (Mark O'Brien). The young woman from humble beginnings is also getting married into a major board game empire. To see if the bride will fit in with the family, Grace must undergo a traditional ritual the night after the wedding at the imposing family estate: As a new member of the Le Domas', she must draw a card from a deck that determines which game she will play with the new family. She draws the hide-and-seek card, of all things - the one card that could have drastic consequences for Grace. For she must now hide somewhere on the estate and not be found until sunrise. But if she is discovered anyway, then the game ends with her death. For Grace it is clear: she can only survive such a game if she plays by her own rules.

Ready or not from the directing duo Matt Bettinelli-Olpin and Tyler Gillett is a very refreshing contribution to the horror genre. Not only is this finally some original material rather than a remake, sequel or reboot. It's also that the two filmmakers have finally directed a nasty, bloody and genuinely funny horror-comedy again, which makes for a positive surprise when watching it. Sure, the wheel is not reinvented here. But the film is just fun to watch and even has a few really well done surprises at some points. That alone is enough to make you overlook a few weaker gags or familiar genre clichés.

The actors all play really well, with Samara Weaving in particular being just great as the bride on the run from her in-laws. Just how perfectly she is cast in this role is made clear by the way she utters the last sentence of the film. Wonderful! But also some very original (and not always intended) deaths always provide some really good laughs in their macabre way. The only thing you could criticize the movie for, especially in this respect, is the fact that there are some longer sequences where there is no trace of humor to be found. Here it almost seems as if the filmmakers couldn't quite decide whether they want to deliver solid horror or rather a bloody comedy. This difficult balancing act has, for example, Edgar Wright with Shaun of the Dead clearly better mastered.

Despite this: Even with some weaknesses Ready or not is in the end a great pleasure for all who like their horror fare not only bloody, but also extremely amusing served. A game of hide and seek of a different kind, which just barely scrapes by cult status. And for this there is then also more than deserved one: Absolutely worth seeing!