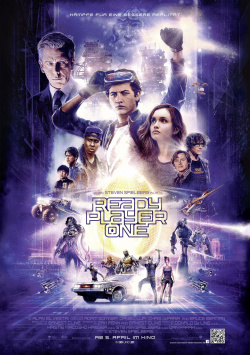 In a not-too-distant future, humanity groans under wars, scarce resources, and a world climate gone mad. Wade Watts (Tye Sheridan) takes every opportunity he can to escape the bleak reality and reside in the OASIS, a virtual world where he can be what and look how he wants. This world, where users can let their imagination run wild, is the retreat for most people. The OASIS was created by the eccentric genius James Halliday (Mark Rylance). When the maverick died, he decreed that his entire fortune and total control of the OASIS should go to whoever succeeds in finding an Easter Egg that Halliday hid deep within the OASIS. This can only be accomplished by completing the tasks that lead you to the secret keys. For years, numerous hunters have been trying to find the Easter Egg, but they are still biting their teeth at the first task. Wade is one of those players who has not yet given up hope of finding the great fortune. After countless attempts, he succeeds one day in the big trick: he finds the first key. But in doing so, he also sets an organization on him that wants to take control of the OASIS at any cost.

The novel Ready Player One by Ernest Cline is considered an absolute cult novel, especially for lovers of 80s pop culture. And who better to adapt it to film than the man who shaped that era like no other. Steven Spielberg, whose work as director and producer is of course mentioned in the book, was faced with a difficult task. He had to create two worlds at once that would draw the audience into the story. On the one hand, the real world, which should appear futuristic, but is still anchored in our present and thus has a certain recognition value. On the other hand, the virtual world, which needs to be imaginative, limitless and full of wonder, but still not seem too alien or cluttered.

Spielberg has managed to do both with flying colors. This is especially evident in the fact that as a viewer you quickly forget that the avatars look very artificial after all. One is carried away by the richness of detail of the OASIS, which is not limited to the appearance of cult figures of pop culture - like King Kong, Freddy Kruger, Hello Kitty and and and -. Even if the diversity and size of the worlds of the OASIS as described in the book aren't really conveyed, Spielberg does a great job of conjuring up a virtual playground for the audience's eyes to really feast upon. Admittedly, it's a bit much at times and it takes watching the film several times to really appreciate all the details. But Spielberg has thankfully avoided complete visual overkill by also making time for plenty of real-world character moments, which work no less well.

Well, the film takes some liberties with the book as well. For instance, the cinematic incarnation of Wade Watts looks considerably better than Cline describes. Also, unlike in the book, his avatar doesn't really resemble him. Of course, this doesn't change much about the extremely high entertainment value of the movie. Pace, action, suspense, humor - almost always exactly the right button is pressed. Particularly successful is exactly the sequence in which the film departs furthest from the book: when obtaining the second key. If Wade and his friends had to go to War Games in the novel, it's a very different, rather creepy cult work in the film. And the homage to this classic is great to say the least!

Besides the fact that the plot is, strictly speaking, a bit thin and the movie doesn't offer much more dramaturgically than a gaudy video game, Ready Player One has really become quite great cinematic entertainment. With two completely different films, which were released only a few months apart from each other (The Publisher opened in Germany only a few weeks ago), Steven Spielberg once again underlines his status as one of the greatest and most important directors of modern entertainment cinema. If you just like his fantasy films, love the pop culture of the 80s and also have nothing against a certain video game look, you should not miss this successful bestseller adaptation. Absolutely recommendable!

Cinema trailer for the movie "Ready Player One (USA 2017)"
Loading the player ...