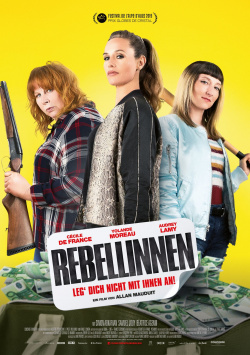 Rebels - don't mess with them!

After 15 years the former provincial beauty queen Sandra (Cécile de France) returns to her small hometown in northern France. With her meager resume, however, she only finds work in a fish canning factory, where she stands on an assembly line with housewife Nadine (Yolande Moreau) and single mother Marilyn (Audrey Lamy). The three women couldn't be more different. But when Sandra is harassed by her boss one evening, the three of them stick together. However, this leads to the unintended death of the boss. When the women find him with a bag full of money, it's clear: the police can't call them. Without further ado the dead boss is packed into tins and disposed of and the women are happy about the unexpected money blessing. Too stupid, though, that not only the police soon ask them many unpleasant questions. Even a local gangster, for whom the bag was actually intended, sets off in search of his money and quickly finds his way to the women. But the three don't want to admit defeat so easily…

"Rebelinnen" is a successful comedy, which scores especially with the great trio of actresses Cécile de France, Yolande Moreau and Audrey Lamy. But also the fact that the story is seasoned with a good portion of social satire at the beginning makes the film worth seeing for long stretches. Of course, some of the characters are overdone and some dramaturgical aspects seem slightly constructed. But all in all, the initial situation doesn't really seem implausible. It is understandable how the women get into their predicament and also why they use such drastic means to keep the money.

The three are very interesting drawn characters, which have some slight stereotypical characteristics, but are nevertheless pleasantly versatile. This doesn't only make for some very amusing moments, but also for some quite surprising ones. Especially in the first 60 minutes the movie works really well because of this. But then the whole thing drifts too much into Tarantino-Eesque terrain. This doesn't mean that the movie loses its entertainment value, but instead its closeness to reality. The big showdown is amusing, but completely absurd and a bit over the top.

But since the movie is over after a crisp 87 minutes, the small weaknesses the "rebels" have to struggle with hardly have a negative impact. Women's power, black humor and a up to a certain point well constructed story make this leaded comedy despite smaller point deductions quite still: Worth seeing!

Cinema trailer for the movie "Rebels - don't mess with them! (Frankreich 2019)"
Loading the player ...