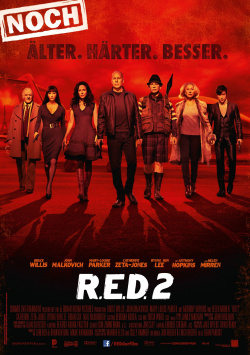 Blue beans instead of oatmeal, fast cars instead of walkers, and explosive fights instead of paint-by-numbers - everything is different with these retirees: after Frank Moses (Bruce Willis), a retired CIA agent, has uncovered a murderous plot together with his new girlfriend Sarah (Mary-Louise Parker), as well as his former companions Marvin (John Malkovich) and MI6 assassin Victoria (Helen Mirren), a little peace has returned to his life. But it doesn't last long. For Marvin, who moments before advised him to go into hiding as quickly as possible, is targeted for assassination. A mysterious US secret service agent (Neal McDonough) seems to be behind it and Frank is also on his hit list due to alleged insider knowledge about a super bomb. But of course, he won't be taken out that easily. Even when dangerous hitman Han (Byung Hun Lee) is sent after him, Frank and Sarah always seem to be one step ahead of their pursuers. It's only when his Russian ex-flame Katya (Catherine Zeta-Jones) shows up that things could get really dicey for Frank. His last hope seems to be Edward Bailey (Anthony Hopkins), the inventor of the super bomb, who has been imprisoned in a maximum security prison for 32 years. But if Frank has learned anything over the course of his CIA career, it's that things are usually never what they seem.

R.E.D. 2 is the sequel to the 2010 box-office hit, in which German director Robert Schwentke showed in a thoroughly amusing way that even spry retirees still have what it takes to make convincing action stars. The relatively inexpensively staged action comedy was able to bring in almost four times its production costs worldwide, which almost inevitably had to lead to a sequel. In addition to Bruce Willis, John Malkovic, Mary-Louise Parker and Helen Mirren, Catherine Zeta-Jones and the great Anthony Hopkins join the good-humored cast this time around. Schwentke handed the directorial reins over to Dean Parisot, the maker of the wonderful sci-fi comedy Galaxy Quest.

Parisot is clearly trying hard to surpass the first installment in terms of action and comedy. However, he only succeeds in a few scenes. Too often his efforts seem a bit too strained or they simply overshoot the mark. No question, the movie is still a hell of a lot of fun. But that certain surprise effect, which made the whole thing seem new and refreshing the first time around, is clearly missing in the second attempt. This is especially noticeable in a negative way with Sarah, played by Mary-Louise Parker. In the first part it was really amusing to watch how the normal girl next door was drawn into the murderous world of the secret services. Her kind was there still in her somewhat chaotic way very endearing. Now Sarah is so hooked on the adrenaline rushes that she just can't and won't go back to normal everyday life. And this turns her into an extreme pain in the ass, who in some moments comes close to squandering all the sympathy she gained in the first part.

However, even if R.E.D. 2 keeps falling into the usual sequel traps, the flick also has many positive aspects to offer. The scenes with Anthony Hopkins are quite wonderful and the fight sequences from Korean superstar Byung Hun Lee are the cherry on top of the already excellently served action platter. And even though the humour doesn't quite spark as sharply as it did in the first part, there are still plenty of really good laughs in between the car chases, gun fights and explosions. That doesn't make R.E.D. 2 to a big popcorn pleasure. But if you liked the first part, you'll be offered two extremely entertaining hours here as well. And for that there is then despite smaller point deductions still a more than deserved: Absolutely worth seeing!