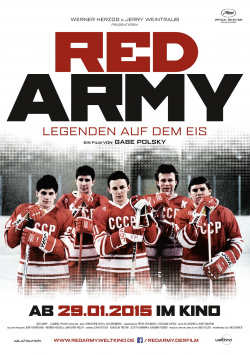 The Soviet Union's national ice hockey team was once considered unbeatable. Even greats like the teams from Canada and the USA were mercilessly inferior to the players of ZSKA, the hockey club of the Red Army. This was the result of extremely hard training that knew only one goal: to humiliate the West and demonstrate the superiority of the socialist system. One of the best players of the national team was captain Slava Fetisov, whose strength did not go unnoticed by the officials of the American NHL. In the course of perestroika, Fetissow was one of the first Soviet hockey players to be lured to the USA with the prospect of freedom and prosperity. But this success also had enormous downsides. In his homeland, Fetissov was seen as a traitor and political enemy, and in the U.S., he was met with nothing but rejection and downright hatred as well. The fact that his style did not want to integrate into the American way of playing did not make the situation any easier. Nevertheless, more and more players from the Soviet Union come to the USA - and suddenly the tide seems to turn and the mood changes.

With Red Army - Legends on Ice, American director Gabe Polsky, son of Russian immigrants, has staged a very multi-layered documentary. At first glance, you might think it's a straight sports documentary, tracing the history of the Soviet ice hockey team. But Polsky, for whom the film was also a way to explore his own background, uses this framework very well to paint a much broader picture of the political and social history of the Soviet Union. At the same time, the Werner Herzog co-produced documentary also functions as a testament to prejudice and xenophobia in the U.S.

The film is also an excellent example of the eternal struggle between capitalism and communism. And it is a stirring biography of a man who goes from shining hero to outlaw traitor to the country, only to be welcomed back with open arms as minister of sports. This man is Slava Fetisov, who provides insight into his not always easy life in very open interviews. It is especially interesting how his effect on the viewer changes over the course of the film. At the beginning, his demeanor seems extremely unpleasant and arrogant. But the more you learn about him, his sometimes very courageous career decisions and their consequences, the more the rejection turns into respect. And even if Fetissow may not be the greatest sympathizer in the end, one recognizes in him a person to whom one must tip one's hat in many respects.

Although the film comes down hard on the instrumentalization of sport as a means of propaganda, the sometimes extreme training methods, and the ideology behind them, the film should by no means be understood as anti-Russia propaganda. The criticisms Polsky makes through various archival footage and interviews are too balanced for that. This is particularly well demonstrated in the reaction of American fans and journalists to the inclusion of players from the Soviet Union in the NHL. These are met with antiquated prejudice, demeaning insults and palpable hatred in their new homeland. But the moment they provide victories, the hatred turns from one moment to the next into admiration, enthusiasm and love. This mendacity, which can hardly be surpassed in superficiality, revealed in such behavior, cannot exactly be considered a show of love for the United States. It is important for Poslky to criticize this side as well, so that his film appears balanced and credible.

Red Army - Legends on Ice is an extremely interesting and exciting film, whose story also translates very well into the present. It's an entertaining as well as exposing piece of work that provides viewers with a wealth of contemporary historical information in its fairly short running time, and also reveals some fascinating insights into the world of international hockey. For this there is a very clear: Absolutely worth seeing!