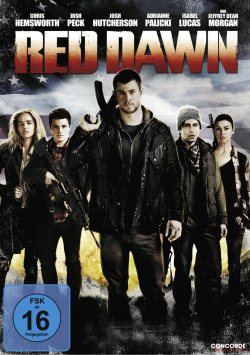 Contents: The inhabitants of the small town of Spokane are amazed when one day fighter planes appear in the sky, from which hundreds of paratroopers jump out and turn the peaceful everyday life of the inhabitants into a bloody nightmare. The impossible seems to have come true: America is under attack from North Korea. Most of the inhabitants surrender to this completely surprising attack and allow Spokane to be occupied by Captain Cho (Will Yun Lee) and his men. But a small group of teenagers around the brothers Jed (Chris Hemsworth) and Matt Eckert (Josh Peck) manage to escape into the adjoining woods. From here the resistance is to be planned. While the convinced Marine Jed primarily has the liberation of Spokane in mind, Matt's thoughts revolve solely around his girlfriend Erica (Isabel Lucas), whom he wants to liberate at all costs from the hands of the brutal occupiers. There is a growing tension among the brothers, which also affects the rest of the small troop. But in order to defeat the not only numerically superior army of Captain Cho, the "Wolverines" have to overcome their conflicts and stand together like one man. Only then will Spokane have the chance to be liberated from the hands of the North Korean occupiers...

1984 director John Milius had the then young stars Charlie Sheen, C. Thomas Howell and the later "Dirty Dancing" stars Patrick Swayze and Jennifer Grey fight against evil Soviets. Although the film was accused of an almost arrogant patriotism, "Die rote Flut" developed into a real cult film in the course of the years. Reason enough for Hollywood to retell the story of the "Wolverines". The shooting of the remake of "Red Dawn", with which Dan Bradley, Second Unit director for films such as "Mission: Impossible - Phantom Protokoll" or "James Bond: A Quantum of Solace", was allowed to make his directorial debut, already began in September 2009. But the film was simply not under a good star. At first the release was put on hold due to financial problems of the studio and when finally a new start date was found, it had to be postponed again to make North Koreans out of the Chinese attackers. These additional digital changes cost another 1 million dollars and increased the budget to an impressive 65,000,000 dollars.

When the film finally reached the cinemas at the end of 2012, the budget at the box office could not be re-recorded. However, it is doubtful whether this was due to the constant postponement of the start date. After all, with Chris Hemsworth ("Avengers") and Josh Hutcherson ("The Tributes of Panem") the movie has two very attractive stars, especially for a younger audience. And director Dan Bradley also did a very good job with the visual realization, of which you could already get an idea in the well edited first trailer. When it comes to action, "Red Dawn" can really convince. Just the invasion at the beginning is really good and explosively staged.

But what really sick the movie about is its script. Not only has patriotism been increased many times over compared to the original, instead of concentrating on a more logical scenario. Moreover, in many scenes the film simply looks like an advertising film of the American weapons lobby. In the course of the current discussions about tightening the weapons law, the supporters of the weapons lobby repeatedly argued that it is the constitutional right of every American to want to protect himself against attacks from outside with weapons. And if the evil North Koreans suddenly invade a small American town, then of course you have to have fast fire rifles and other large-caliber weapons at hand.

Then it's a good thing that Jed is a navy that comes directly from a war zone and can therefore provide the right drill among the "Wolverines". And then there are sentences like "War is ugly and hard. But when you have to fight on your own doorstep, you fight for your family. Accompanied by music that is only so overflowing with pathos, such scenes of course leave a very nasty aftertaste, which is even intensified by the very stenciled drawing of the enemy image.

If you can overlook this and have fun rather than get excited about the very clichéd dialogues, then you get a solid action movie, which visually has some really strong moments to offer. So if you're looking for something just for the eye, you can access it here with confidence. But if you want to question the message or simply get a good, logical story, you will certainly not find many good sides to this hymn to American patriotism.

Picture + Sound: From a purely technical point of view, the DVD is quite convincing. The sound comes very powerful and dynamic from the speakers, whereby the action sequences in particular can score with numerous well implemented surround effects. The visual realization of the film pleases with a tidy image sharpness, a harmonious coloring as well as well tuned contrasts and black values. Good!

Extras: The DVD has a lot of bonus material to offer, but it is primarily very short promo contributions without real information content. We start with five short promo features on the story (ca. 2:27), the Wolverines (ca. 2:34), the action (ca. 2:47), the bootcamp, where the actors were prepared for their roles (ca. 2:31), as well as on "Girls & Explosions" (ca. 2:11). Here film excerpts, interviews and short B-Roll recordings are cut together to small advertising clips, which offer short insights into the production, but never look even close to the surface. And exactly that would have been very interesting for a production that had to overcome so many hurdles.

We continue with three actor interviews by Chris Hemsworth (approx. 4 min.), Josh Hutcherson (approx. 3:30 min.) and Connor Cruise (approx. 2 min.), which also only offer the usual promo phrases. A bit better are the short B-Roll clips, which look at the set (approx. 11 min.) or into the Boot Camp (approx. 4 min.). The trailer and further program tips of the offerer round the auxiliary offer off.

Fazit: "Red Dawn" may be technically clearly superior to the original from 1984. But the script of the explosive remake is even flatter and more patriotic than "The Red Tide" by John Milius. If you can overlook the stereotypical character drawing and the dialogues that are overflowing with pathos, you'll at least get a lot of neatly staged action with appealing show values, which should entertain fans of striking US actionware well.