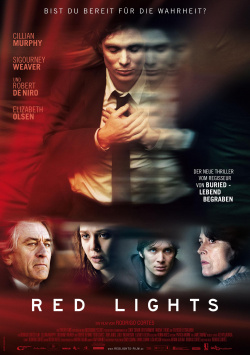 It's the media event of the year: 30 years after he retired from the public eye following a mysterious incident, blind parapsychologist Simon Silver (Robert De Niro) announces he will return for one last big performance. As fans excitedly scramble for the few tickets to the show, university professor Dr. Margaret Matheson (Sigourney Weaver) sees her big chance coming. Together with her young assistant Tom Buckley (Cillian Murphy), Matheson's stated goal is to expose every form of alleged paranormal and metaphysical as a hoax. And since she's managed to do that with every supposed parapsychologist so far, exposing Silver, who once embarrassed her badly on TV, as a charlatan would certainly put the crown on her research. But as the two set out to get to the bottom of Silver's secrets, mysterious events soon occur that could not only be dangerous to the inherently strong beliefs of the two scientists...

With the 2010 thriller "Buried - Lebend begraben" Spanish director Rodrigo Cortez has delivered a real blast. The claustrophobic thriller starring Ryan Reynolds was able to grip and surprise again and again despite its spatial limitations until the end. This has admittedly raised expectations for the director's new film, which has been intensified by the illustrious cast. Unfortunately, Red Lights can't live up to these high expectations. Not that the film isn't exciting. Cortés builds up a coherent atmosphere from the beginning, which cleverly keeps the viewer in the dark until the end about whether Simon Silver really has psychic abilities, or whether he is just a genius conman after all.

It's not that the actors don't know how to convince either. Whether it's the usual confident Sigourney Weaver, the somewhat underwhelming Robert De Niro or the quite intense Cillian Murphy, they deliver solid to very good performances throughout, as do the supporting actors Elizabeth Olsen, Toby Jones and Joely Richardson. And also the visual realization can fully convince, Cortés makes a skilful effort some very strong, gloomy images, which cinematographer Xavi Giménez (The Machinist, Transsiberian) has captured with high atmospheric effect.

And yet the whole thing remains in the end only a decent mystery thriller, which can not keep the high level with which it starts into the story, until the finale. The script gets too caught up in inconsistencies and eventually gets crushed by its own ambitions. For even though the set-up of the action itself seems to be very clever and the mixture of fantastic set pieces and real-life thriller elements works well, the increasingly shaky plot framework fizzles out in a somehow disappointing resolution that fails to live up to the high expectations the film stoked with its promising beginning.

Red Lights is nevertheless not a pipe-drop. Cortés has succeeded in making a solid mystery thriller, somewhat reminiscent of the good old X-Files days, that can counter its somewhat spotty story with good actors and an engaging atmosphere. Even if a lasting effect is missing, the film offers entertaining genre entertainment and that's exactly why Red Lights is still worth seeing despite its chess points