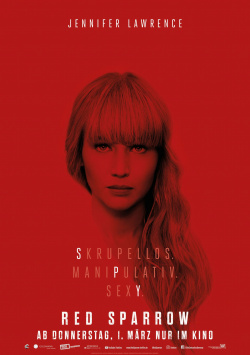 Dominika Egorova (Jennifer Lawrence) had a great career ahead of her as a ballerina. But an accident not only destroys that dream, it threatens to drive the young woman and her ailing mother into poverty. Dominika is convinced by her uncle Vanya Egorov (Matthias Schoenarts) that the only way out for her is to become part of the secret Sparrow program. She is now trained to use not only her mind, but also her body as a weapon. Despite initial doubts and resistance, Dominika masters the brutal and not infrequently humiliating training with flying colors. Soon, she gets to put her newly acquired skills to the test with a highly charged assignment in which she is sent after CIA agent Nate Nash (Joel Edgerton) - unaware that she is about to become part of a vast conspiracy that could prove deadly for her as well.

By the end of Red Sparrow, I was not only a little disappointed, but even a tiny bit angry. Not because the movie was really bad. On the contrary: the latest collaboration of The Tribute of Panem 2 - 4 director Frances Lawrence and Oscar winner Jennifer Lawrence actually has all the ingredients for a gripping spy thriller: a story that is exciting at its core, a leading actress who really gives it her all, an ensemble that is well cast down to small supporting roles, and a gripping atmosphere created by the visuals. And yet, the film adaptation of Jason Matthews' bestseller leaves its viewers rather cold.

The reason for this lies in the arguably overloaded screenplay, which too often gets lost in long-winded dialogues and subplots. When there is some action, it is very well directed. But when the whole thing has just picked up some speed, it is almost immediately slowed down by emotionally undercooled moments. That's a pity, because especially Lawrence plays extremely strong in some scenes, which unfortunately seems wasted in the end. You can always tell that Frances Lawrence is a good director who knows how to stage certain moments impressively. However, he fails to iron out the script's weaknesses even with top-notch actors like Jeremy Irons, Ciar&aacute;n Hinds or Joel Edgerton.

One minute gripping and extremely suspenseful, the next tough, boring and somehow inconsequential - that is the disappointing conclusion that remains after almost two and a half hours. A film with numerous good moments, but with even more moments that don't really want to work. Some thriller, some drama, some action and plenty of long dialogues - the mix could have been a bit more balanced. Because so it is only enough for a bottom line: Worth seeing with reservations!