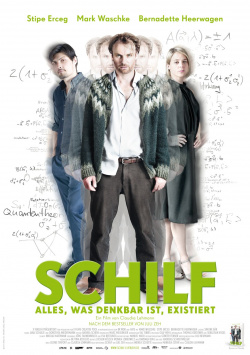 Reed - Everything that is conceivable exists

Physics professor Sebastian (Mark Waschke) believes in the existence of parallel universes and has been trying to prove this scientifically for years now. One of his biggest skeptics is his former student friend Oskar (Stipe Erceg), who now works as a professor of theoretical physics at the renowned CERN Institute in Geneva and repeatedly clashes with Sebastian because of his many worlds theory. When Sebastian's wife Maike (Bernadette Heerwagen) leaves for a cycling holiday in the mountains, the physicist resolves to devote himself to his thesis in complete peace and quiet and to counteract his friend's doubts once and for all. Before that, he just has to get his son Nick to summer camp. But during a brief stop at a rest stop, Nick disappears without a trace, which is the beginning of a disturbing nightmare for Sebastian. For soon his own theory seems to catch up with him, and the appearance of a mysterious old man who calls himself Schilf makes him lose control for good...

Schilf is based on the bestselling novel by Juli Zeh, with whose adaptation Claudia Lehmann, who holds a doctorate in physics, makes her debut as a feature film director. Lehmann's version of the story is a multi-layered mystery nightmare that is definitely one thing: ambitious! A German thriller dealing with parallel universes and time travel is a real rarity. Lehmann has to be thanked for the courage to leave the beaten track and to offer the audience entertainment that also strains the intellect. And so it should also be mentioned first that Reed has a fascinating atmosphere that in a certain way manages to captivate, even when it is not always possible to follow what is happening.

The camera work is excellent, as is the performance of the cast. But unfortunately, these positives don't come up against the film's big problem: it's just too cerebral. Sure, you don't have to be a quantum physicist to understand the story. But even though Sebastian explains his theory and thus the most important clues for understanding the story very clearly and comprehensible for everyone at the beginning, it's still hard to follow the somewhat twisted story that takes place on different levels. It just seems as if Lehmann assumes that all viewers are as familiar with the subject matter as she may be through her research for the film and her work as a physicist. As I said, she deserves credit for trying to direct a challenging mystery thriller. However, if she had been a bit more responsive to the viewer in the process, and if she had made the whole thing a bit clearer and more comprehensible, then Reed could have been a truly great film.

But as it is, the whole thing has become an arguably unwieldy work that gets too lost in its own convolutedness and seems to have the sole aim of letting the viewer out of the cinema as confused as possible. Ambitious entertainment cinema is a good thing. But when a movie is crushed by its own ambitions, neither good actors nor a gripping atmosphere will help. Then in the end all that remains is to say: despite good preconditions unfortunately only worth seeing to a limited extent!

Cinema trailer for the movie "Reed - Everything that is conceivable exists (Deutschland 2011)"
Loading the player ...