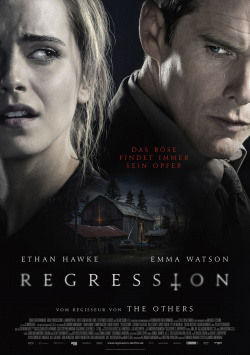 Minnesota, 1990: Detective Bruce Kenner (Ethan Hawke) gets to deal with a particularly tricky case when young Angela Gray (Emma Watson) accuses her father of sexual abuse and he pleads guilty, even though he has no memory of the alleged crime. Psychologist Kenneth Raines (David Thewlis) is hired to help bring back those very memories. With the help of regression therapy, the gruesome truth is to be brought to light. But when Kenner manages to get the traumatized girl to testify, it becomes clear that the case will take on unexpected dimensions. The sexual abuse is said to have been part of a satanic ritual in which Angela's father and numerous other people took part - including a policeman. When Raines also uses regression therapy on Angela's brother, the suspicion seems to be confirmed that there really is a cult at work in the small town. More and more Kenner gets caught in a maelstrom of delusions, fears and nightmares, which bring him step by step not only closer to the truth, but also to madness...

Regression is the sixth directorial effort by Alejandro Amenábar, who has shown great versatility as a filmmaker with The Others and The Sea in Me. Especially The Others managed perfectly to tell a thrilling story, to give its audience comforting goosebumps and to surprise them with a great finale. Regression has many parallels to that. This new work also has an extremely atmospheric imagery with a very pleasant goosebump factor in parts, as well as a very exciting story at its core, which is convincingly conveyed by the actors. However, the major and significant difference with The Others is that Regression bitterly disappoints, particularly towards the end.

The first hour offers extremely tense and involving genre cinema. The extremely atmospherically captured locations in Ontario, Canada, the music by Roque Baños, and the fine acting by Ethan Hawke and Emma Watson (Harry Potter) draw the viewer well into the story. At some moments you are extremely tense and really pushed into your seat by the tension. Admittedly, neither the story nor the creepy effects are particularly original. Amenábar blithely serves all the clichés you often find in such mystery thrillers. Nevertheless, the production is atmospherically so dense that enough tension can arise to cover all negative aspects.

But the closer the story gets to its end and its surprising resolution, the more clearly all the weaknesses come to the fore. Even though the story may be inspired by true events, the solution to the mystery is simply too weak to even come close to the good build-up of suspense. And even if the movie is able to entertain for a long time, the last act makes you leave the cinema rather disappointed. Surely: this doesn't make Regression a bad movie. But Amenábar himself has shown how crucial a good finale can be. Without the twist at the end, hardly anyone would still be talking about The Others today. Since he didn't manage to do something like that again, it will lead to Regression being forgotten very quickly. Unfortunately, that's not really a pity. Therefore: Only with deductions worth seeing!

Cinema trailer for the movie "Regression (Kanada/Spanien 2015)"
Loading the player ...