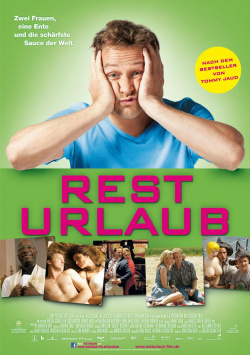 Not only the novels of the former weekly show and Ladykracher author Tommy Jaud enjoy great popularity. The film adaptation of his first novel Vollidiot, starring Oliver Pocher, was also a respectable success. So it's no wonder that Jaud's second bestseller Resturlaub has now also found its way into the cinema - adapted for the screen by the author himself.

The comedy centres on Pitschi Greulich (Maximilian Brückner), a man in his mid-thirties who simply refuses to accept that he will have to grow up one day. But when his best friend Arne (Stephan Luca) gets married and his girlfriend Biene (Mira Bartuschek) also dreams aloud of a future together with a home of his own and children, Pitschi finally falls into a deep crisis. For him, there is only one solution: get away - as fast and as far as possible. While Biene and his friends fly off together on holiday to Mallorca, Pitschi fakes a robbery and stays at home - only to flee a few moments later towards Buenos Aires. There he wants to enjoy life to the fullest, success and sexy lovers included. But he doesn't quite want to succeed with this plan, and so he may have put a beautiful future with Biene on the line for nothing at all.

Director Gregor Schnitzler (The Cloud, Solo Album) seems to have staged a really successful relationship comedy, especially at the beginning. The failed bachelor party, embarrassing games at the wedding or Pitschi's reaction to Biene's wish to have a child, all of it is full of wit and an amusing realism. The beautiful shots of picturesque Bamberg also contribute to the film's good first impression. But unfortunately it doesn't last.

The fact that guest stars Martina Hill (Switch Reloaded) and comedian Dave Davis only present minimal variations of already known characters (for Hill it's her Heidi Klum imitation, for Davis his alter-ego Motombo) doesn't bode well. And indeed, the further the story progresses, the flatter the gags become. Spontaneous erections or farting in the face of the annoying landlord are still on the higher level scale. This is a pity, because the film repeatedly hides very successful moments amidst the flat jokes and thus does not even come close to the potential that the story holds.

Whether in Tatort, or in feature films such as Allein, Sophie Scholl or Wer früher stirbt, ist länger tot, Maximilian Brückner has already proven several times that he rightly belongs to the best actors of young German cinema. But brute comedy doesn't really seem to suit Brückner. Even if here and there the fun of the role is clearly noticeable, his performance is overall far below the level that one is otherwise accustomed to from the mime. Even the talented Mira Bartuschek is unfortunately not allowed to show much more than just being cute. Too bad.

Sure, Resturlaub has some very good laughs to offer. However, the many flat and unfortunately very stale jokes and the rather failed attempts to score points with slapstick soon leave the viewer hoping that this holiday will end quickly. In itself good actors, a capable director and beautiful locations would have deserved something much better - just like the moviegoer! Therefore: despite some very nice moments only something for hardcore fans of the book