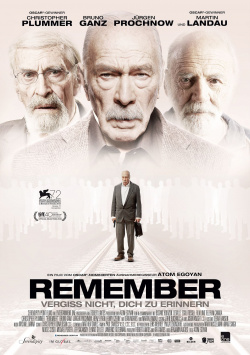 Slowly but unstoppably the veil of forgetfulness lies over Zev (Christopher Plummer). Since his wife's death, dementia seems to be progressing faster than before. But before he finally forgets his past, he wants to settle one last score with the help of Max (Martin Landau), whom he met in the old people's home. The concentration camp supervisor of all people, who killed Zev's entire family over 70 years ago, is hiding under a new identity in the USA. With the help of a letter in which Max has written down precise instructions to him, Zev wants to find the man and lead him to his just punishment. With his last strength Zev sets off on a journey that not only turns into a fight for revenge, but also into a bitter race against time…

With "Remember" the Canadian director Atom Egoyan ("Chloe") has staged a really difficult film. On the one hand, the story he tells is really exciting and extremely captivating. On the other hand, the age and the progressive dementia of the main character inevitably bring with them a slowness and a repetitive narrative character, whereby the narrative flow is slowed down or even slowed down again and again. As a viewer you are repeatedly confronted with details that Zev has to remember again and again. This is consistently implemented, but in the long run can be a bit tiring and gruelling for the audience.

Despite a subtly applied pinch of quiet, loosening humor, "Remember" proves to be a very exhausting and at times also very lengthy drama. The outstanding game by Christopher Plummer doesn't help much. However, there are two sequences that at the end make sure that the movie is absolutely worth seeing despite its lengths. During his search for the alleged murderer of his family, the old man makes the acquaintance of a very friendly policeman, played by Dean Norris ("Breaking Bad"). This scene suddenly takes an extremely depressing turn, culminating in an undreamt-of finale that really shakes you up in the cinema chair.

One might almost think that this is the most intense scene in the film. But far from it. Egoyan saves it for last. The resolution of the story is really great and really surprising. The last 5 minutes are so gripping and stirring that almost all the strains that led to this scene are forgotten. "Remember" may be a challenge to the patience of the audience. But it's one that really pays off in the end. Atom Egoyan has created an atmospheric, dense thriller drama in which the theme of forgetting is dealt with in an unexpectedly haunting way, which ultimately leads to the fact that you won't forget this film - or at least its ending - so quickly. And despite some lengths and exhausting moments there is a clear one: Worth seeing!

Cinema trailer for the movie "Remember (Kanada/Deutschland 2015)"
Loading the player ...