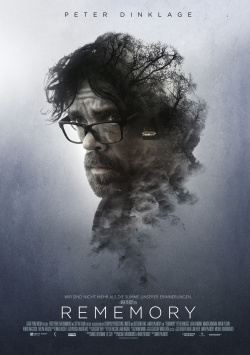 Famed scientist Gordon Dunn presents a revolutionary invention to the public that can record and replay human memories. Shortly after the presentation, Dunn is found dead in his office. While the police can only follow up a few leads, Carolyn (Julia Ormond), Dunn's widow, withdraws completely from the public eye. Only a mysterious stranger (Peter Dinklage) manages to get the grieving Carolyn to open up to him a little. What she doesn't suspect is that the stranger has only visited her to steal her husband's invention in order to solve Dunn's death himself. Why, remains his tragic secret.

Rememory is an interesting thriller-drama. The idea of recording human memories is truly not new. The theme is already known from movies like Strange Days or from the series Black Mirror. But even though the story isn't exactly original, its premise works quite well for a guilt-and-atonement thriller. With Peter Dinklage, Julia Ormond and the sadly too early deceased Anton Yelchin in one of his last roles, the film is also really well cast.

The problem, rather, is the over-ambitious direction by Mark Palansky, who wants to tell the story slowly, artfully and mysteriously. While this undeniably creates a truly engaging atmosphere. But the story, unfortunately, lacks pace entirely and one can't help but feel that the plot could have been told more effectively in much less time. As it is, however, despite engaging imagery and a story that is good at its core, Palansky cannot prevent the audience from being repeatedly plagued by extreme boredom.

Rememory is not a bad movie. It really isn't. But it is a work that wastes a lot of potential and doesn't make more out of an exciting premise than average TV-level entertainment. For that, it only gets a: (at least in the cinema) conditionally worth seeing!