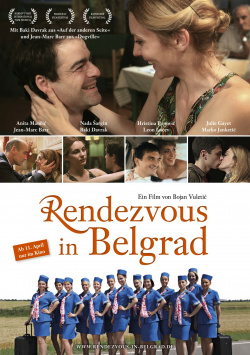 After years of being isolated from the West, the Serbian metropolis was able to slowly open up to the world again after the fall of President Slobodan Milo&scaron;ević's regime. On the one hand still scarred by war and afflicted with ancient traditions, on the other marked by vibrant modernity, Belgrade today is a city between two eras, a place where value systems of different worlds meet. More and more tourists are discovering the metropolis, and in recent years it has increasingly developed into a party city for young Europeans, alongside Barcelona and Berlin. So it is here that a wide variety of people of different nationalities meet, a starting point that Bojan Vuletic has used for his latest film.

His episodic film Rendezvous in Belgrade is a declaration of love for Belgrade, a kind of idealized travel guide in which the city's advantages are extolled in choral songs framing the individual episodes. Here, on his first day in his new job, young Stefan (Marko Janketic) is supposed to just pick up French singer Silvie (Julie Gayet) from the airport and take her to her gig. But since Silvie's life has just completely fallen apart and she doesn't even think about delivering a normal performance now, Stefan's job turns out to be much more difficult than first assumed. Things also get complicated in the relationship of Melita (Anita Manačic) and the American Brian (Jean-Marc Barr), who regularly meet for passionate hours in the hotel. When they realize that they have different ideas about a possible future together, the uncomplicated togetherness is over for the time being.

A very special evening is also experienced by the German-Turkish businessman Orhan (Baki Davrak), who, after missing his plane, is invited by a group of good-humored young people to a hen party of the Serbian policewoman Djurdja (Hristina Popovic). There he makes the acquaintance of the chambermaid Jagoda (Nada Sargin), who quickly shows a very keen interest in Orhan. For Djurdja herself, the wedding festivities take a rather unpleasant turn when she learns a not really pleasant secret from her future husband, the Croatian policeman Mato (Leon Lučev), shortly before the wedding ceremony. But Djurdja also has something to confess to her intended.

The idea of introducing special places in Belgrade between episodes, with the scenery always accompanied by couples kissing, and having somewhat whimsical choirs extol the virtues of the city is clearly one of the things that makes Rendezvous in Belgrade so charming. But the mix of tender restraint and over-the-top humor also has its own unique appeal. In this respect, Bojan Vuletic has succeeded very well in making the viewer want to visit this city, which here seems like an almost magical place.

That doesn't prevent this original declaration of love for Belgrade and its people from suffering from the same problem as most other episodic films, though. That's because, as a rule, not all the individual parts work equally well, and Rendezvous in Belgrade is no exception. While some episodes are very entertaining and amusing, others drag on and on or just don't work dramaturgically. This results in a somewhat inconsistent overall picture, which, however, turns out to be mostly positive. Who appreciates Eastern European cinema of the lighter kind, can therefore confidently arrange a rendezvous in Belgrade. Worth seeing