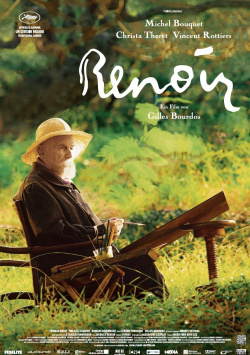 While the whole country groans under World War 1, the aging painter Auguste Renoir (Michel Bouguet) lives in seclusion on his estate on the C&ocirc;te d`Azur. Although his hands are crippled by old age arthritis, Renoir has no thought of stopping painting. Surrounded by numerous women who lovingly care for him, the old man looks to his art as a way to cope with the death of his wife and the anguish for his son Jean (Vincent Rottiers), who is fighting in the war. The young Andr&eacute;e (Christa Theret) is to serve as Renoir's new muse with her beauty and insouciance. Working together makes the painter truly blossom and he even seems to feel something like a zest for life again. When Jean returns home injured from the war, he too soon succumbs to the fascination that Andr&eacute;e exudes. He believes he has found in her a kindred soul by whose side he might step out from under his father's outsized shadow. But then, alongside events take a dramatic turn and Jean's dream is in danger of being abruptly shattered.

Gilles Bourdo's Renoir is a very quietly and thoughtfully told drama that derives its special appeal not only from its literally painterly imagery. The juxtaposition of opposites, which is one of the film's central motifs, also lends the whole thing a certain tension despite its extreme slowness. Here, age and youth confront each other, beauty and transience, but also the art forms of painting and cinema. The film is thus more than just a portrait of the aging Impressionist Auguste Renoir and the future filmmaker Jean Renoir. It also shows how the affection for Andr&eacute;e connects these two not only artistically different personalities on a very special level.

Krista Theret, known from the original French version of the teen comedy LOL, proves to be the perfect casting for the young muse of the two men. Not just on the outside, the voluptuous redhead is a real godsend for the film as the epitome of youth and insouciance. Her acting, too, makes it quite understandable that the painter, scarred by age, illness, and grief, should blossom again through her presence, and that the son, shaken by the horror of war, should rediscover the beauty of life through her insouciance.

Renoir lives less from its dialogue than from its images. The film is dominated by long moments of almost complete silence, in which Taiwanese Mark Ping Bing Lee's camera revels in the enchanting landscape of southern France or celebrates Christa Theret's seductive nudity with relish, but always artistically and not voyeuristically. Bourdos attempts to do justice to both his father's and son Renoir's work with his visual language, showing the viewer the world, as it were, through the eyes of these two great artists.

This is really quite beguiling and beautiful visually. Dramaturgically, however, the film is a bit thin. The story offers no real surprises, especially to viewers who know a little about the artists' biographies. Moreover, it is told so ponderously that in such moments, when the beautiful pictures can't spread their magic, a very tough impression can arise. Especially viewers who are rather inexperienced in French arthouse cinema might be quickly bored by the film due to the almost complete lack of real climaxes.

But those who can be enchanted by the paintings of Auguste Renoir in particular will be able to discover a similar magic in the imagery of this film. The strong acting of the cast then further supports the positive impression created for such viewers, making this small, quiet drama a great, intense viewing experience. And for these viewers then also applies: despite some lengths absolutely worth seeing!

Cinema trailer for the movie "Renoir (Frankreich 2012)"
Loading the player ...