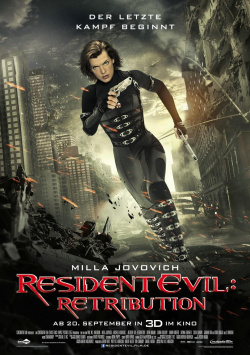 Alice's (Milla Jovovich) battle against the Umbrella Corporation and the zombie apocalypse they've caused enters its fifth round. Having made it aboard the ship Arcadia at the end of Resident Evil: Afterlife, where she hoped to meet more survivors of the epidemic, she now faces an attack from the Umbrella henchmen, led by her former comrade-in-arms Jill Valentine (Sienna Guilroy), who has switched sides after being brainwashed. An explosion knocks Alice into the sea and she loses consciousness. When she reawakens, she finds herself in a giant Umbrella station from which there seems to be no escape. But a rescue party is already on its way to help Alice escape. But the Red Queen and also Jill Valentine want to prevent at all costs that such an escape succeeds...

Resident Evil: Retribution offers the fan again exactly what has made the video games and movies of the series so popular: Zombies, tough heroines in sexy outfits, extended gunfights, a very clear story and some nice looking effects. In doing so, director Paul W.S. Anderson, in his third Resident Evil directorial effort, revisits the video game origins of the story more than he did with the last installments in the series. So this time, Alice actually has to fight her way from level to level to accomplish her task - escaping the station. Along the way, she encounters loyal companions (Michelle Rodriguez, killed in the first installment, gets to come back from the dead), old adversaries, and new monsters.

The idea of Alice having to fight her way through simulations of Tokyo, New York, and Moscow is nice in itself. But unfortunately, the story ends up being just too thin and the endless battle sequences too tedious in the long run to be truly engaging. Surely, the Resident Evil movies are not known for their depth, for sophisticated dialogues or multilayered characters. But especially the last part had to offer a little more entertainment value than just senseless brawling. Here is simply missing the igniting spark, which makes an exciting and fun fantasy-horror-action movie out of what is in itself a decent idea.

In addition, the production seems overall a bit lovelessly cranked down. Surely there shouldn't be too much emphasis on logic. But when the rescue party that is supposed to free Alice shoots at two Umbrella guards standing next to each other one after the other, and the second one stands still while the first one falls down hit, just to give off as easy a target as possible, it's just stupid. Since the creators already don't have to put much effort into the construction of the story and the writing of the dialogue, it would have been nice and only fair to the loyal fans if they had then put a little more effort into the action scenes and shown more ingenuity.

There are, however, some good moments that fans will enjoy. For instance, Anderson has included some nice references to the previous films. Also, he has once again understood it very well, his wife Milla Jovovich extremely handsome in scene. As for the 3D effects, he relies on the same effects that already worked well in the last part. Looks good, but is nothing really new. Also convincing can the entrance sequence played in slow motion backwards and the finale, which, if the success allows it, lets hope for a truly spectacular sixth part.

So, on balance, it can be said that Resident Evil: Retribution provides loyal fans of the series enough good reasons to buy a movie ticket. However, this fifth installment tends to be one of the weaker entries in a series already not marked by quality first-rate. The makers have tried to be original, but they fall back into old patterns too quickly, both in terms of content and visuals, to be able to really surprise, excite or captivate. If there should be a sixth part, Anderson and his team would be well advised to put on a strong shovel on it, in order not to disappoint the fans finally. Therefore: Brain off, 3D glasses on and off goes the zombie battle. Who expects nothing more than pointless videogame action, this fifth Resident Evil film can still be recommended despite clear signs of fatigue.