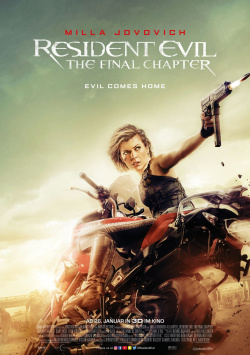 Alice's (Milla Jovovich) battle against the Umbrella Corporation and the zombie apocalypse they caused enters its final (?) round. In order to stop the final destruction of humanity, Alice must go back to the beginning - to where the T-virus originated. She has little time to penetrate the underground Umbrella labs in ruined Raccoon City, where an anti-virus supposedly exists that could spread through the air and kill all T-viruses. It's a last glimmer of hope, but one that Alice clings to doggedly. In fact, she also makes it to Raccoon City, where she meets her former comrade-in-arms Claire Redfield (Ali Larter), who has joined a group of rebels here. Together, they now battle a horde of zombies and the last surviving minions of the Umbrella Corporation. But when they board it into its underground fortress, they find that this is where the horror really begins.

Resident Evil: The Final Chapter once again offers fans exactly what has made the series' video games and movies so popular: Zombies and mutations, tough heroines in sexy outfits, extended gunfights, a very well laid out story, and some nice looking effects. In doing so, director Paul W.S. Anderson revisits the beginnings of the film series in his fourth Resident Evil directorial effort and comes to a thoroughly satisfying conclusion as a result. Granted, the entire series has never excelled in quality scripts, Oscar-worthy acting, or delicate direction. Some of the films have been better, others considerably weaker - but really, the Resident Evil films have never been good. Entertaining, maybe, but good not. And that doesn't change in the supposed finale.

Flat dialogue, action cut too quickly and frantically, and characters drawn in an arguably template-like fashion dominate the proceedings. But even if this may not convince qualitatively, a certain entertainment value can not be denied. And it really turns up the heat in the finale. When Alice has to fight against huge hordes of infected and all rules of gravity and logic are set aside, this already has a pretty high fun factor. And if then in the last third of the arc to Part 1 and is peppered with many allusions for loyal fans of the series, then one accepts gladly some logic hole or the unintentionally funny dialogues for it.

Naturally, the film is still bottom line quite big nonsense. Actually, the very first scene, in which Alice has to fight a flying mutation, makes that abundantly clear. But there is also entertaining nonsense - and Resident Evil: The Final Chapter is without a doubt one of them. For fans there is the second best part of the series at the end - and that is absolutely reconcilable in view of the fact that the creators unfortunately didn't have the guts to let the whole thing end completely consequently. Therefore, the bottom line is a clear: Worth seeing!