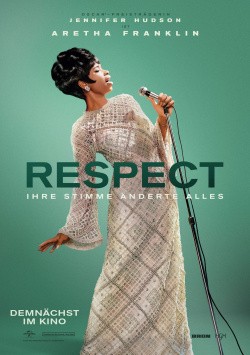 She was the Queen of Soul, one of the greatest singers of her time, a committed civil rights activist and a terrific songwriter whose music has been an inspiration to countless artists: Aretha Franklin. But how did the girl who lost her mother at an early age, who sang in her father's church choir and who had to deal with numerous traumatic experiences from childhood become an internationally celebrated superstar? The biopic "Respect" provides the answer. While she was still alive, it was clear to Franklin that there was only one artist who could bring her life's work to the screen: Oscar and Grammy winner Jennifer Hudson. Directed by renowned stage director Liesl Tommy, this is a film that shows how close the leading actress was to the great singer she embodies. Otherwise, however, the drama is rather conventional.

Conventional should not necessarily be rated negatively, because "Respect" is acting and especially musically great cinema. But dramaturgically the film follows the often used pattern of other biopics and offers no real surprises. Even if only a part of the life of the Queen of Soul is treated and the story ends with the live recording of her legendary gospel album in 1972, there is relatively little room in the two and a half hour running time to really go into depth in the many aspects of her life and work that are touched upon. Yes, it becomes clear what a great artist Aretha Franklin was. Yes, it is also shown with what problems she had to fight - from violence in marriage to extreme alcohol consumption to racism.

But in all this is just for purely temporal reasons only scratched the surface, which is a very general problem of biopics. As already said, however, the film can make up for many weaknesses with the strong performance of Jennifer Hudson. Hudson, who of course also sings all the songs herself, puts an incredible amount of passion, intensity and heart into this role, so that one is happy to overlook the somewhat weaker, clichéd moments. But also the rest of the ensemble, especially Forest Whitaker, ensures that the film has become strong acting cinema.

Although the big surprises are missing and you have the feeling to have seen much before, leaves "Respect" an almost entirely positive overall impression. Great music, an extremely good leading actress and the really exciting life of Aretha Franklin make this biopic despite all minor weaknesses in the end: Absolutely worth seeing!