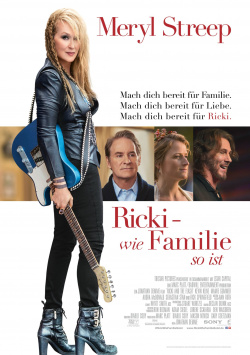 Many years ago, Ricki Rendazzo (Meryl Streep) chose a career in music over her family. Now she's divorced, completely estranged from her children, and she hasn't gotten her big break either. Instead, she heats up the few guests in a small bar night after night. She knows that she was not a very good mother, but she can suppress it quite well. That changes when her daughter Julie (Mamie Gummer) tries to take her own life. Ricki scrapes together her last few dollars to fly immediately to her ex-husband Pete's (Kevin Kline) house, where Julie is staying again after separating from her husband. Immediately, Ricki realizes that this is a completely different world that she just doesn't belong in anymore. Still, she wants to free Julie from her lethargic grief and finally be to her what she hasn't been until now: a loving mother. But is it perhaps just too late for that?

There have been times when a film by director Jonathan Demme (Philadelphia, The Silence of the Lambs) with a screenplay by Diablo Cody (Juno) would have been a guaranteed winner at the Oscars and at the top of the box office charts. And when you add Meryl Streep in the lead role, who would probably still be nominated for an Oscar even if she read the weather forecast, there's nothing standing in the way of a critics' favorite and box office hit. But those days are over. Neither Jonathan Demme nor Diablo Cody have been able to match their old successes with their latest projects. And Meryl Streep is still an absolute critics' darling, but no longer a guarantor for full box offices.

Considering the former potential of the three, their collaboration in the family film Ricki - Like Family So Is is rather disappointing at the core. The script lacks the very biting dialogue that Diablo Cody is actually known for. And the staging is extremely conventional, well-behaved and clichéd - something Jonathan Demme expertly avoided in the past. And as a washed-up rock singer, Meryl Streep has finally found the role in which she is not one hundred percent convincing. Her singing is okay, but her acting overall seems a little too contrived to be believable.

The story and its inevitable happy ending are extremely poor in surprise, and towards the end tries unsuccessfully to scrape past violent family kitsch. Now this may sound like a total disaster. And there will be viewers for whom this film is just that. But despite all the valid criticisms, the film also has plenty of charm, wit and heart to offer. In addition, the chemistry between the actors is spot on, which is no surprise especially with Meryl Streep and Mamie Gummer since they are also mother and daughter in real life. If you can overlook the predictability of the story and the lack of surprise in the staging, it's just fun to watch this family reunion.

Here, things are always politically correct and the film lacks any rough edges. But the goal of the story is to provide the audience with entertaining good mood entertainment. And the film does that very well over long stretches. So if you don't expect a masterpiece and just want to see a nice movie that lets you go back to reality with a smile on your face and a song on your lips, this is the right movie for you. For this there is then also a clear: Worth seeing!