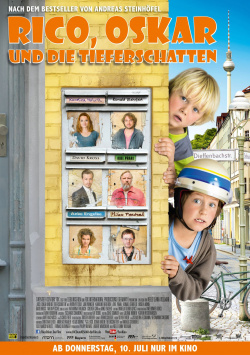 Rico, Oskar and the Deep Shadows

Rico (Anton Petzold) is a little different from the other kids. Rico is deeply gifted. He just needs a little longer to grasp certain things and gets help from his portable recorder to remember the way to the supermarket or the next ice cream parlor. But in his own special way, Rico also sees the special things in things that other people simply overlook. And so sometimes a noodle can be something quite exciting. When the search for a found noodle brings him together with the highly talented Oskar (Juri Winkler), it is the beginning of a very special friendship and a dangerous adventure. For Oskar becomes the latest victim of the mysterious kidnapper, whom everyone just calls Mister 2000. And Rico must now find out all by himself who the mysterious villain is and where he is hiding his new best friend. Will he succeed without the helpful advice of his mother (Karoline Herfurth) and without Oskar's lightning-fast powers of deduction?

The first few minutes of the film adaptation of the popular children's and youth novel Rico, Oskar und die Tieferschatten don't exactly bode well. After a lovingly animated opening credits, which is supposed to bridge the gap between the drawings in the book and the film version, a scene follows in which Rico can be seen playing bingo with his mother. Here the viewer is introduced to Ellie Wandbeck, the chief bingo drummer, who plays a central role in the second book - and thus also in the already announced second film. This character is embodied by Katharina Thalbach, who can currently be seen or heard in almost every German children's film and, despite the different roles, somehow always seems to play similarly - always a bit wacky, exaggerated and silly, just the way children like it. But slowly the casting of a character like Ellie Wandbeck with Katharina Thalbach just seems unimaginative, which is why it may be feared that the rest of the film also plays it safe and strictly sticks to the recipe for success of Hanni & Nanni, Fünf Freunde and similar commercially successful but rather soulless children's films.

But fortunately this is not the case. Director Neele Vollmar (Maria, ihm schmeckt`s nicht) and her screenwriters have captured the spirit of the book very well and enriched it with some very nice ideas of their own. The emphasis was not on what some marketing experts believe children will find great. Rather, the target audience is clearly understood and taken seriously here. That's why the humour is not kept extremely simple and is not limited to overly dorky adults or farting animals, but can also be a little more inappropriate, quirky and politically incorrect. This gives the impression, as in the successful book, that the world here is really seen through children's eyes.

The characters are very lovingly drawn, with both the children and the adults all having rough edges - and precisely because of this they seem extremely likeable and human. In addition to the humor and the pleasantly cliché-free character drawing, the film also has plenty of suspense to offer, which makes the story an exciting adventure, especially in the second half. Vollmar has succeeded very well in drawing all the inhabitants of the house in Dieffenbachstrasse 93 in such a way that they could theoretically be Mister 2000. But even those who already know the book and thus the resolution need not fear that the film will be boring. Especially the scene in which Rico sets out on a nightly search for Oskar is very excitingly realized. Even though I haven't been part of the target audience for a few years now, it was clear to me in this scene at the latest that I would have really enjoyed the film as a child.

Rico, Oskar und die Tieferschatten is an excellent example of what a good children's film can look like when it doesn't rely on the easy, obvious laughs and the production doesn't play it safe every minute. Like the author Andreas Steinhöfel, who has won awards for his books, Neele Vollmar and her team have realised an amusing and exciting story that really seems to understand children, their view of the world with all its fears and its joys. Greatly played by the two young main actors Anton Petzold and Juri Winkler, the whole thing ends up being a great film for viewers aged 6 - 14, but also for everyone who is young at heart. Absolutely worth seeing

Cinema trailer for the movie "Rico, Oskar and the Deep Shadows (Deutschland 2014)"
Loading the player ...