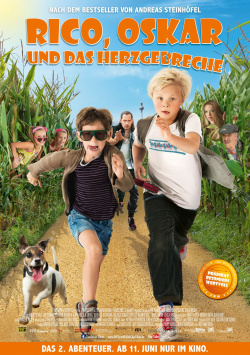 Rico, Oskar and the Heartbreak

Until now Rico (Anton Petzold) has always been a loner and an outsider. Because he is a little different from the other kids. Rico is deeply gifted. He always takes a little longer to understand things and lives in his very own world. But now he has finally found a friend: the highly gifted Oskar (Juri Winkler). He finally comes back from his holidays and is even allowed to spend the night with Rico. Actually a very big reason for joy. But somehow Oskar behaves very strangely. Is he sad because his father doesn't want to take care of him? Or does it have something to do with what he observed while playing bingo with Rico's mother (Karoline Herfurth)? Sooner than expected, the friends find themselves in a new adventure that puts their still fresh friendship to a severe test...

Following the successful film adaptation of the popular children's and youth novel Rico, Oskar und die Tieferschatten, the sequel Rico, Oskar und das Herzgebreche is now coming to cinemas. This time Wolfgang Groos (The Vampire Sisters, Suburban Crocodiles 3) has taken over the direction. Groos relies much more clearly than his predecessor Neele Leana Vollmer on wry humor and over-the-top characters, such as the shady bingo fairy Elli Wandbeck (Katharina Thalbach) and her slightly underexposed son Boris (Moritz Bleibtreu). This is indeed really funny in some scenes and especially appeals to the target audience. But unfortunately it comes at the expense of the charm with which the first film could score and positively stand out from the mass of German children's films.

The two young leads, on the other hand, are almost better than when they first appeared together. They have grown into their roles and harmonize really well with each other due to the well-developed differences between the two characters. Their adult co-stars Anton Petzold and Juri Winkler therefore play this time again easily to the wall.

For children, Rico, Oskar and the Heartbreak is quite a lot of fun, even if the story is not quite as exciting as their encounter with the Tieferschatten and some important elements of the story, such as Oskar's difficult relationship with his always absent father, are treated far too superficially. But despite its flaws, Part 2 again has that special something and plenty of off-kilter humor. And that consoles over the weaknesses of the script and some too much on Klamauk trimmed gags. For this there is not, as for part 1, the top mark. A satisfied, on the young target group oriented viewing value have the unequal friends but always deserved!

Cinema trailer for the movie "Rico, Oskar and the Heartbreak (Deutschland 2015)"
Loading the player ...