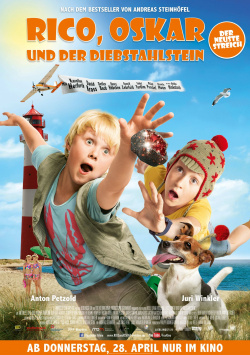 Rico, Oskar and the Thief Stone

The deeply gifted Rico (Anton Petzold) and his best friend, the highly gifted Oskar (Juri Winkler) are back! After the two unequal friends first put the evil child kidnapper Mister 2000 behind bars and then unmasked the machinations of bingo aunt Ellie Wandbeck, they get to deal with a very special theft in their third and final adventure. After the death of the grumpy neighbour Fitzke, Rico is supposed to take care of his beloved stone collection. But shortly after Fitzke's funeral, the fabulous calf stone disappears from his apartment. Rico and Oskar are sure that the mysterious woman in a yellow jacket, whom Rico discovered at the funeral, is behind the theft. Since Rico's mother and her policeman boyfriend are on a make-out vacation together and Oskar's father (Detlev Buck) doesn't seem to be very interested in the kids, the boys willy-nilly have to take the investigation into their own hands again. In the process, they end up at the Baltic Sea and don't even stop at the nudist beach to get the Kalbstein back.

After the successful film adaptation of the popular children's and youth novel Rico, Oskar und die Tieferschatten, the sequel Rico, Oskar und das Herzgebreche was released a year later. However, it lacked the very special charm and enigmatic wit that made Part 1 such a particularly successful children's film. The good news is that with Neele Leana Vollmar, the director of the first part, its quality is coming back for the finale. Thus, the trilogy is concluded after all with the second best film of the series - a conciliatory finale, which will definitely make it difficult for little fans to say goodbye to Rico and Oskar.

The story is gripping, and at some points even so exciting that it might get a little too exciting for very young moviegoers. But every dark moment of suspense is quickly followed by a lightening joke, which often not only children can laugh heartily about. Unlike in part 2, the humour here rarely gets too silly and sometimes even has a deeper level that remains undiscovered by the little viewers, but which parents can then smile about in amusement. Overall, it is very positive that the script and director take their target audience seriously and do not limit themselves to the pee pee humor that is unfortunately too often used in children's films, but also sometimes use a little more subtle wit.

Great praise is also due to the two young leads. They have grown into their roles perfectly and harmonize really well with each other due to the well-developed differences between the two characters. Their adult co-stars Anton Petzold and Juri Winkler therefore again easily outplay them. Even if there are a few small hangs and the quality of part 1 is not quite reached, so Rico, Oskar and the Thief Stone is still for children a great fun and therefore also: Absolutely worth seeing!

Cinema trailer for the movie "Rico, Oskar and the Thief Stone (Deutschland 2016)"
Loading the player ...