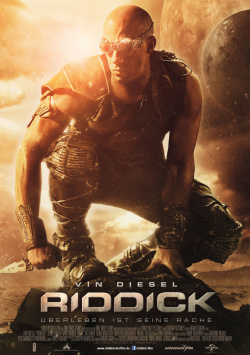 Only briefly did Riddick's (Vin Diesel) time as Lord Marshall of the Necromongers last. After the dastardly commander Vaako (Karl Urban) betrayed and overthrew him, he was taken to a barren planet and left badly injured to inevitable death. But of course, a Riddick is not so easily taken out. Defeating hunger, thirst, and bloodthirsty monsters, he manages to save himself to an abandoned station from which he can send out a distress signal. Of course, no rescue squad comes to free him from his predicament, but two groups of brutal bounty hunters, who now want to finally knock out the life light of the most dangerous warrior in the galaxy. But Riddick has long been one step ahead of them and so the hunters soon become a much reduced group of merciless hunted, who must fight desperately against alien monsters and an unpredictable Riddick.

Nine years it has taken Vin Diesel and director David Twohy to return to the character of intergalactic felon Riddick, so beloved not only by them personally but also by many fans, after the rather modest success of Riddick - Chronicles of a Warrior. Whereas much of what made the character so beloved from 2000's surprise hit Pitch Black was lost in the 2004 film under an overly bloated story and completely overstuffed production, Diesel and Twohy wanted to get back to basics with the third film. With a third of the budget they had in 2004, the two wanted to tell a smaller, dirtier story again this time, one in which Riddick also gets to display the gritty cool that earned him so many fans.

After the opening sequence does a good job of illustrating why Riddick - Chronicles of a Warrior didn't work, the film quickly takes a completely different direction. Accompanied only by an occasional voice-over commentary, a battered Riddick must face off against all manner of dangers and monstrous alien beings before meeting up with other humans again about 30 minutes into the film. Even if many set pieces from Pitch Black are directly taken up here and neither the story, nor the character drawing show special originality, the entertainment value of the film rises steadily.

Sure, the dialogues are occasionally to run away bad and also the effects look a little cheap in some moments. The flight across the planet on a space motorcycle in particular is a bit reminiscent of 80s Flash Gordon in terms of quality. It's not exactly what you would generally call great cinema. Still, Riddick works really well overall. That's because the film doesn't try for one minute to be anything more than a little trashy gem. Vin Diesel knows that Riddick is a classic B-movie character and as such, he works really well. You can tell Vin Diesel's acting enjoys playing this sinister character with a twinkle in his eye. But it's also obviously good for Twohy's direction that the pressure of an expensive studio production has been taken off him.

Only now can the fun factor take center stage again. No grand mythology to build up slows down the action, no overly ostentatious costumes distract from the gritty, grim action. Now Riddick is allowed to be the loner he was in Pitch Black again - and is also allowed to resort to sometimes very brutal means to ensure his own survival. Even if dramaturgically no new ground is opened and some scenes drag on unpleasantly because of their unintentional comedy, so Riddick has become overall exactly the film that one would have liked as a direct sequel to Pitch Black. If you don't expect an expensive glossy product, but are looking for solid B-movie fare, which besides a little trash also has a lot of passable effects, amusing sayings, wonderfully exaggerated brutality and an extremely cool Vin Diesel to offer, you will be very well served here. Worth seeing