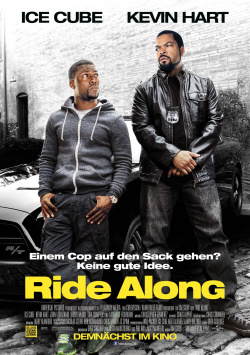 Ben Barber (Kevin Hart) would so love to be a real cop. Then James (Ice Cube), the brother of his girlfriend Angela (Tika Sumpter) would finally respect him. And then nothing would stand in the way of a wedding. Too bad that the school guard has a pretty big mouth, but otherwise not necessarily the best qualifications for the tough job as a cop. When Ben gets accepted to the police academy anyway, he sees his big chance coming and he asks James to give him his blessing to marry Angela. But James doesn't know which idea is worse: having to call Ben his brother-in-law or having to know the complete idiot armed on the streets in the police force. He realizes he's going to have to get the ideas out of Ben's head. And the only way to do that is to show him what everyday life as a cop is really like. And so he invites Ben to accompany him on patrol for a day. The plan seems to work, because the first joint operation almost ends in a disaster. But Ben isn't intimidated that easily. And when the unlikely duo suddenly find themselves up against Atlanta's most dangerous gangster, their day together takes an unexpected turn.

With Ride Along, director Tim Story has landed a real surprise hit in the USA. And that's despite the fact that the comedy doesn't exude even a shred of originality. The story brings back strong memories of the typical buddy-cop comedies of the 80s, Ice Cube wears the same annoyed expression with which he already struggled through Are we there yet? and Kevin Hart is as always - just Kevin Hart. In the USA, where he is also very successful as a stand-up comedian, Kevin Hart has long been a star. In this country you know many of his films like Scary Movie 3 + 4, Almost Married or most recently Two of the Old Stroke, but his name is only known to a few. Whether this will change with Ride Along is questionable. Because even if the action comedy has the potential to be a hit, the story as well as the actors are just too interchangeable to leave a lasting impression.

Admittedly, the squabbles between the grouchy James and the pain in the ass Ben are sometimes very funny and especially in the last act the film has some decent action interludes and moments of tension to offer. And Laurence Fishburne also cuts a really good figure as the ice-cold chief villain. But like Ben in his first attempts at the shooting range, the script never really hits the mark. As good as the pacing of the production may be, the template-like characters, the thin story and the not particularly clever dialogues always take the wind out of the sails. By the fact that comparisons to much better genre representatives like the Rush Hour movies, Only 48 Hours or the Lethal Weapon series almost impose themselves in many scenes, the weaknesses of Ride Along are further emphasized.

Sure, there are many buddy cop movies that are far less entertaining and have even flatter gags to offer. National Security with Martin Lawrence or Detroit City with Pat Morita and the later Late Night King Jay Leno, for example, really don't belong to the pearls of this popular genre. But just because Tim Story has already shown with Barbershop and even with the rather weak Dank wie ein Mann that he has quite a talent for comedic timing and he has implemented the action in his Fantastic Four films quite appealing, the arguably soulless implementation of Ride Along is all the more disappointing.

If you just want to have fun and simply knitted action comedies after Schema F like, the weaknesses will probably not really bother. After all, the film works quite well as simple entertainment to turn your brain off. But if you expect some nice moments, some really good gags and a not entirely predictable story, or if you are quickly annoyed by the constantly chattering Kevin Hart, you will soon stop laughing. And therefore there is also only one: with clear deductions still worth seeing!