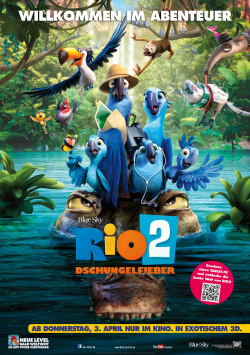 With Rio, a declaration of love to his hometown of Rio de Janeiro, Ice Age director Carlos Saldanha hit the heart of many viewers in 2011. Worldwide, the animated adventure about the Spix's Macaw Blu, who actually lives in Minnesota and suddenly finds himself in the middle of a fast-paced adventure in Rio, managed to gross almost 500 million dollars. So it was only a matter of time before Blu and his friends returned for another adventure. The wait is now over, as Rio 2 - Jungle Fever, the sequel, is now coming to cinemas, and at least those viewers who liked the first film will have a lot of fun with it.

Blu (voiced by David Kross) and Jewel (Johanna Klum) meanwhile lead an exciting, yet orderly family life with their children Bia, Tiago and Clara in the middle of Rio. But when Bia's former owner and best friend Linda and her husband Tulio find evidence in the Amazon that more Spix's Macaws might be living there, Jewel is eager to fly there. After all, she wants her children to see where they actually come from. To make his wife happy, Blu agrees to this wish and after some detours the family, accompanied by their faithful friends Nico (Mr. Reedoo), Pedro (Mateo) and Rafael (Roberto Blanco) actually finds a wonderful place in the deep jungle where many of their kind still live in freedom. That alone would be a reason for joy, but Jewel is completely out of her mind when she meets among the Spix's Macaws also her father Eduardo, who was thought dead, and her aunt Mimi again. For Blu, on the other hand, the joy is limited. He just can't do anything with so much nature, and the fact that Eduardo keeps showing him that he doesn't think much of a big city bird like him doesn't make things any easier either. But the real problems start when the bird's paradise is threatened by humans. And when an old rival shows up to take revenge on Blu, the quiet, idyllic life is over for good.

From the very first scene, it's clear that Rio 2 - Jungle Fever is one of those sequels that plays it absolutely safe in order to be able to repeat the success of its predecessor no matter what. The film starts with one of the musical numbers that the audience seemed to like so much in the first part. If you can do without these song and dance interludes, be warned: there is a lot more singing in the further course of the story - and that's really not always nice! Blu, even after all the adventures he's had, is still the overprotective nerd bird he was at the beginning of the first film. And his companions also act more or less exactly the same as they did in the prequel. The only differences are some new characters and moving the action from the urban jungle to the real jungle.

This, of course, provides the perfect setting for subplots, which are unfortunately a bit overused: the evil man, who is only out for profit and destroying nature to do so, has to be stopped by the animals and the good eco-activists. It's not really imaginative. But originality is not the strong point of Rio 2 - Jungle Fever anyway. Director Saldanah relies too much on the inevitable 3D rollercoaster effects accompanied by loud Ahhhhs and Ohhhhs and extended vocal numbers, rather than genuine charm and slightly more tongue-in-cheek wit. But while that may not sound like a really positive thing right now, it's fair to say that for those who liked the first installment, the new adventure really does offer the best entertainment. Because the fans want to see more of what they could laugh heartily about before. So Pedro and Nico are again allowed to knock many cool sayings, Tulio must stumble over everything that somehow gets in his way and Blu has to realize again and again that life as a pet is then quite different than that of a bird living in freedom - whether he wants, or not.

Rio 2 - Jungle Fever is very beautifully animated and pleases especially in the second half of the film at least visually with a tremendous wealth of detail and imagination. Some of the gags are genuinely amusing and the characters on the whole quite likeable. And since the film is quite entertaining despite all the justified criticism and at least the fans of the first part will not mind that this sequel has the somewhat stale aftertaste of a pure commercial product without its own character, there is also a very clear: worth seeing for just these viewers!