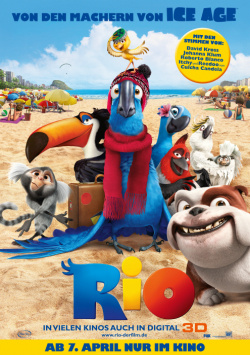 After working on the hugely successful Ice Age films, director Carlos Saldanha has retreated to warmer climes for his latest animated adventure, choosing his hometown of Rio de Janeiro as the setting. Taking place in the colorful setting of the famous Carnival, however, the Rio adventure is less rousing than the jaunty samba rhythms would lead one to hope.

As a small bird, Blu the blue macaw (voiced by David Kross) was kidnapped from his native Rio, but by a happy accident landed in the loving hands of Linda, who gives him a cozy home in chilly Minnesota. The years go by and Linda and Blu have long since become something of a little family. Then one day the clumsy Tulio shows up and tells Linda that Blu is one of the last of his kind and should mate with the macaw lady Jewel (voiced by Johanna Klum) in Rio to ensure the continuation of his species. Only reluctantly do Linda and the domesticated Blu embark on the journey to South America, unaware of the adventure that awaits them there.

Great surprises should not be expected from now on. Of course, Blu and Jewel don't get along at all to begin with. Of course, the macaw gets separated from his owner and has to find his way in a world that is completely foreign to him - especially since he never learned to fly. And of course, bad guys are on the prowl for the precious birds. It's all quite nice and entertaining, but nothing more. After a very pretty beginning that shows a lot of potential, Rio gets too lost in frantic chases, constantly writing out loud and falling down somewhere. This just seems tiresome in the long run and robs the film of much of its potential charm.

Unlike films like Oben or Toy Story 3, there is little emphasis on developing the characters here. Rather, the creators rely on the cuteness factor or the comedic potential of the characters. The humor, moreover, isn't particularly layered, but kept very simple and at times arguably over-the-top. In the short term this might be fun for children. Because fast, colorful and loud always goes down well with young audiences. But the animal excursion to Rio hardly stays in the memory for long. For that it simply lacks a really good script. But given that the writers have most recently worked on films like Big Momma`s House 3 or In a Dozen Cheaper 2, Rio could almost be called a minor masterpiece.

In addition, the opportunities that music and carnival, two important elements of the story, would have offered are not really exploited. The songs used in the film, which in the German version are primarily sung by Culcha Candela members Itchy and Reedo, the voices of two cute birds, are relatively weak and don't stay in the ear for long. And the carnival is simply colorful but not really impressively staged. But the film's biggest visual disappointment is the 3D effect, which not only diminishes the colorfulness, but also serves no real purpose. Sure, 3D just draws you in and is what makes movies interesting for many moviegoers. But if 3D is only used to take more money out of the viewer's pocket and doesn't really add anything to the viewing experience, then the purpose of this technology is simply defeated.

Don't get me wrong, Rio is not a bad movie. It definitely provides good entertainment, especially for small viewers, and has some nice ideas to offer as well. But from the mass of 3D animated films that have flooded our cinemas in recent months, this work does not stand out at any moment. And there should have been more expected from the makers of Ice Age. Therefore, if you like to experience funny dancing animals in a brightly colored adventure, Rio can be recommended to you. But if you also expect an original story, spectacular 3D effects or more complex humor, you will leave the cinema rather disappointed.