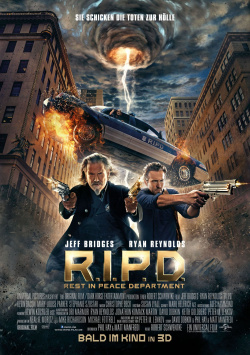 Cop Nick Walker (Ryan Reynolds) is astonished when he is shot by his partner Hayes (Kevin Bacon) during a mission. But he is even more surprised about what happens afterwards. Because Nick suddenly finds himself in a kind of limbo, where he's given a choice by the leg-burning Proctor (Mary-Louise Parker): he can push his luck and try to get into heaven with the dirt he's got on him. However, that could also end with him ending up in eternal purgatory. He could also sign up to serve the R.I.P.D., the Rest In Peace Department, for 100 years. In doing so, he would have to capture such escaped souls who have re-mingled with the living on Earth and transport them back to the eternal hunting grounds. Nick accepts the offer and is partnered with gruff Sheriff Roy Pulsifer (Jeff Bridges). Between the two dissimilar men, trouble seems pre-programmed. But sooner than they would like, they must assert themselves as a team. For Hayes, of all people, is close to putting a truly diabolical plan into action, which could wipe out all life on Earth.

With the film adaptation of the comic R.I.P.D. by Peter M. Lenkov, German director Robert Schwentke actually wanted to build on the success of his box office hits Flightplan and R.E.D.. The story of the fantasy action film actually sounds quite like great blockbuster potential. And the first trailer for the film also looked very promising. There, the whole thing seemed like an amusing mix of Men in Black and Ghostbusters, with lots of action, humor and great effects. But unfortunately the movie can't keep what the trailer promises. The effects are, with some exceptions, really lousy. Especially the too obviously computer-generated monstrous souls that are supposed to hunt Roy and Nick just look cheap and partly really ridiculous.

In addition, the parallels to Men in Black are far more pronounced than the trailer suggests. In some scenes you even get the feeling that you're dealing with a rather shameless copy that lacks any form of independence and originality. After a decent beginning that shows Nick's last mission, the quality curve drops precipitously with his entry into the R.I.P.D. premises. There are some amusing moments, to be sure, and Jeff Bridges consistently provides good humor as a grumpy sheriff with a special relationship with his hat. But against the unimaginativeness of the story and the disappointing effects, even the Dude just can't cut it.

Although this sounds like a cinematic disaster, R.I.P.D. is actually still quite entertaining despite its flaws. The short 95 minutes pass without any real boredom. And the exchanges between Nick and Roy are at times genuinely amusing, especially when it comes to the bodies they inhabit among the living. For while Roy is shown here as a sexy blonde, the once-attractive Nick now has to settle for a somewhat unflattering avatar. In addition, the final third of the film then has a few pleasingly decent action moments to offer. But what makes the comic book adaptation so disappointing nonetheless is that all signs point to the fact that the potential for something much better could have been there. Something that doesn't play it safe and shamelessly borrows from Men in Black and Ghost. Something that creates a world all its own and offers the viewer more than a constant D&eacute;j&agrave;-vu feel.

In the US, R.I.P.D. is already considered one of the biggest financial flops of the year. But it is questionable whether the responsible persons draw the correct lesson from such failures and instead of proving now more courage for new rather still more strengthened on well-known and little original set. But maybe, just maybe, this is the kind of wake-up call Hollywood desperately needs to allow its big blockbusters a breath of fresh air as well. That R.I.P.D. will be a box-office hit in Germany can rightly be doubted. Nevertheless: who liked the Men in Black films and is also satisfied with a slightly weaker variant, which could have fun with this police operation from beyond the grave!