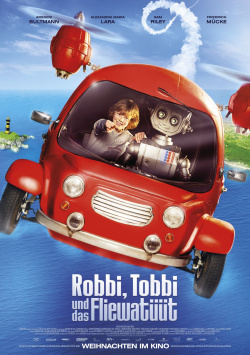 Robbi, Tobbi and the Aviator

Eleven-year-old Tobbi (Arsseni Bultmann) really doesn't have it easy. At school, the passionate tinkerer is teased or even bullied and even his mother (Jördis Triebel) doesn't like it at all that her son prefers to spend his time with some inventions rather than on the football field. Actually Tobbi only needs one thing: a friend. And that friend literally falls at his feet, in the form of the robot Robbi. He was separated from his parents when his spaceship crashed and now has little time to find them again. Of course Tobbi wants to help him and he invents a vehicle with which Robbi can travel the long way to the Arctic, on land, on water and in the air. And that is only possible with a Fliewatüüt! But the unscrupulous Sir Joshua (Friedrich Mücke) is on the robot's trail and is determined to use it for his own purposes. He hires the two bounty hunters Brad Blutbad (Sam Riley) and Sharon Schalldämpfer (Alexandra Maria Lara) to catch Robbi. And suddenly Tobbi also finds himself alongside the little robot in the Fliewatüüt, on the run from the gangsters and on an exciting journey around the world.

With Robbi, Tobbi und das Fliewatüüt, children's film expert Wolfgang Groos (Rico, Oskar und das Herzgebreche, The Vampire Sisters) delivers a largely successful remake of Boy Lornsen's classic children's book. The story, which adults in particular will remember well from the multi-part animated puppet film from the seventies, has been adapted for the new millennium, although the core has of course remained the same. It is a pity that Groos unfortunately could not completely dispense with the poopy-poo humor so often used in German children's films, which may amuse small viewers, but which deprives the film overall of the charm by which the book and the puppet adaptation had distinguished themselves.

However, even if this makes the film somewhat interchangeable and lacks a little of what makes Robbi so interesting to Sir Joshua - his heart - this version of Robbi, Tobbi and the Fliewatüüt for children is quite successful. The tension is always on a child-friendly level, Robbie is very lovable and the fun that especially the couple Alexandra Maria Lara and Sam Riley seem to have had during the filming can definitely be transferred to the audience. Sure, for adult companions, it would have been nice if the whole thing wasn't implemented too childishly. But the target audience is, well, kids between the ages of 6 and 10, and they're really well served here.

They don't mind that the message of the story is served up with a sledgehammer as much as many a flat gag. They also don't mind that the effects aren't entirely convincing at times. And they don't mind that elements of the reinterpretation come across as too clichéd. Because the story, told at a good pace, pulls them along far too much for that and the little robot grows so close to their hearts that they will wish they could sit next to him in the Fliewatüüt themselves. And that's all that matters in the end. Robbi, Tobbi und das Fliewatüüt is, despite some weaknesses, a beautiful and entertaining children's film that offers its target audience 100 exciting, funny and thrilling minutes. And exactly for it there is then also under the line a tidy: Worth seeing!

Cinema trailer for the movie "Robbi, Tobbi and the Aviator (Deutschland 2016)"
Loading the player ...