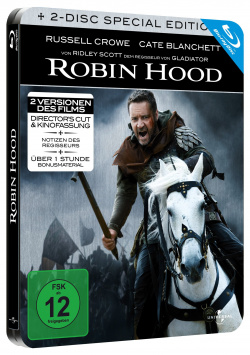 Film: For what is now their fifth collaboration, award-winning director Ridley Scott and Russell Crowe have tackled one of the greatest British legends of all: Robin Hood!

However, the successful duo breaks new ground with their version of the famous archer from Sherwood Forest by not telling the well-known legend in this new version, but its back story. And so Robin Hood fights at the beginning as Robin Longstride at the side of King Richard the Lionheart in France against England's enemies. But when Robin openly expresses his displeasure against the bloody actions of his king towards the innocent population, he falls into disgrace. When the king is apparently mortally wounded in a skirmish, nothing keeps Robin in France. He leaves the war behind and returns to England with a group of loyal companions. Along the way, he encounters the dying Robert Loxley, who was supposed to bring the king's crown to England. Robin takes the knight's promise to bring his sword back to Nottingham to his father Sir Walter Loxley (Max von Sydow).

And so Robin, as Robert Loxley, returns to his homeland, which is headed straight for civil war under the new leadership of Prince John (Oscar Isaac) and his brutal henchman Godfrey (Mark Strong). When Robin witnesses Loxley's widow Marian (Cate Blanchett) being brutally stripped of her land in Nottingham, he realizes he must fight this injustice no matter the cost.

It is to Ridley Scott's credit that he attempts to bring new sides to a story as firmly rooted in modern mythology as the heroic saga of Robin Hood. The original plan to tell the well-known version from the point of view of the sheriffs of Nottingham would have been the better and more interesting choice. For the decision to focus on the story of how Robin Longstride became Robin Hood in the first place brings with it a number of problems that didn't really help the end result.

Besides the fact that Russell Crowe, at 46, is simply too old for the role of Robin Hood, the staging, which strives hard for realism, is in this case more distracting than engaging. What was still a great strength of the respective film in "Gladiator" or "Kingdom of the Heavens", destroys in the case of "Robin Hood" what makes this legend so fascinating in itself. Scott's adventure story, bathed in cold colors, lacks any kind of heroic romance that made other film adaptations of the material so successful. Even the love story between Robin and Lady Marian feels forced here rather than truly poignant and heartfelt.

That's not to say, of course, that "Robin Hood"is a bad film. Craft-wise, the work is impeccable (aside from a few logical flaws and plot holes) and the actors are also largely convincing. The chemistry between Robin Hood and his men is great and the scenes where they first rebel against the injustices in Nottingham have the highest entertainment value. And with Oscar Isaac and Mark Strong, two great villains have been cast, against whom Matthew Macfadyen as the Sheriff of Nottingham seems harmless and disappointingly pale.

However, good actors and solidly crafted production are just not enough to make up for all the film's weaknesses. With his high ambitions, Ridley Scott simply gets in his own way this time. Instead of just offering good entertainment, he wanted to present a realistic looking Robin Hood. And it's just not as much fun as one could have wished from a myth of this kind. A little less "Kingdom of Heaven"feeling and a little more Errol Flynn adventure romance and Ridley Scott's "Robin Hood" could have been the first real smash hit of the 2010 cinema summer. So the film is merely decent entertainment for an entertaining DVD evening - no more, but also no less!

The Director`s Cut: In addition to the theatrical version is on the Blu-Ray also the nearly 15 minutes longer Director`s Cut to find. Besides some good character moments, through which among other things the relationship between Robin and Lady Marian is deepened and thus more believable, the group of children who live in the woods and play an important role at the end of the film is also given a little more time, which is also good for the film. Overall, this longer version of the film is more well-rounded and satisfying, and therefore absolutely worth watching!

Image + Sound: The Blu-ray's image is clean, very sharp and contrasty, but overall quite dark. Colors are atmospherically mixed and even in dark scenes, details are easily discernible. For that, it gets a well-deserved Very Good! One more thing should be mentioned: In the image of the Blu-Ray, the directors cut - in contrast to the DVD - some blood splatters have been retouched away. This is only conditionally negative noticeable, but is simply annoying in principle and above all only little comprehensible!

The sound is decent, but plays not only in the front area. Music and ambient sounds are very atmospherically tuned, but in the more action-heavy scenes, the tonal events lack the final kick, so that the whole thing seems somewhat powerless. Overall, however, the sound can also quite convince.

Extras: On the first disc is, in addition to some image galleries and short videos on the equipment and costumes, still the "Notes of the director", a picture-in-picture option, where interested viewers can learn more about the making of the film, the script, the equipment and much more during the film. Unfortunately, the video segments can't be viewed without the film in the background, as is the case with Warner's Maximum Movie Mode, which definitely dulls the enjoyment of this extra. Overall, though, it's a decent alternative to the missing audio commentary.

Really good extras are found on the second disc of the Special Edition. In addition to some cut scenes with optional audio commentary from the editor explaining why these scenes didn`t even make it into the director`s cut (although at least two scenes would have thoroughly deserved that), there is a nearly hour-long making of on the disc. This documentary goes into great detail and is refreshingly honest about the various stages of production, the different script versions and the filming. There are also quite a few trailers and TV spots. Very good!

Conclusion: "Robin Hood" is a decent adventure film, which, however, has to contend with some lengths and weaknesses in content. On the Blu-Ray, the film presents itself in the theatrical version and in the better director`s cut in very good technical implementation. Who wants to see the good extras, must reach for the double disc, because the single Blu-Ray has only the Director`s Notebook and an extra to the equipment to offer.