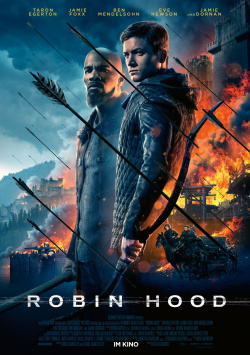 Young Robin of Locksley (Taron Egerton) returns to his home in Nottingham after years at war. There, much has changed - and not for the better. Robin, who was declared dead, has been dispossessed, his beloved Lady Marian (Eve Hewson) has a new husband (Jamie Dornan) at her side, and the people groan under the cruel rule of the Sheriff of Nottingham (Ben Mendelsohn). Robin doesn't want to stand by and do nothing. While outwardly trying to find the sheriff's trust, his companion Little John (Jamie Foxx) and he take up the fight against the ruthless enemy from hiding. But he soon brings out the heavy artillery in his fight against the masked avenger.

To put it bluntly: This reimagining of Robin Hood has little in common with the classic legend. Not only does the film take quite a few liberties historically and geographically (Nottingham is by the sea?), it also mixes the well-known character with modern comic book heroes like Batman. The result is a slightly overstuffed mishmash that is, strictly speaking, outright nonsense. So far, so bad. But: if you can get into it, this completely over-the-top Robin Hood is a lot of fun.

The action is more than solidly staged and the inherently atrocious dialogue is served up with refreshing self-deprecation. Certainly, in the scenes that lack any hint of humor, the script's weaknesses become painfully obvious. Even Taron Egerton's and Jamie Foxx's obvious acting chops can't do much about that. But over long stretches director Otto Bathurst, who has so far worked mainly on TV series such as Black Mirror or Peaky Blinders, has succeeded in an entertaining mixture of buddy comedy, heist movie and medieval action, which makes little sense, but just a lot of fun.

You could put it this way: if you're going to make another Robin Hood variation, please make it one of these. One that is completely different, doesn't take itself so seriously and visually doesn't spill the beans, but really gets down to business. If you go into this with an intellectual approach, you'll be tearing your hair out in despair after just a few minutes. But if you manage to reduce your brain activity so that it's just enough to bring your hand with the popcorn to your mouth, you'll be really entertained. And for that there is then also a proper: Worth seeing!