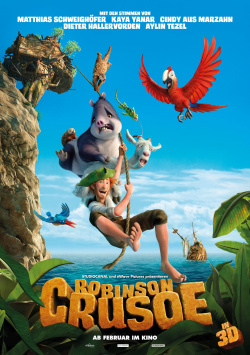 The story of Robinson Crusoe has been adapted countless times since Daniel Defoe's novel was published in 1719. Whether on stage, television, radio, or, of course, in the movies, the story of the castaway Robinson remains a gripping adventure after nearly three hundred years, exerting an unwavering fascination on audiences. Now the team around Ben Stassen (The Magic House, Sammy's Adventure) is bringing another, very free interpretation of the material to our cinemas. In this 3D animated adventure, young Robinson (voiced by Matthias Schweighöfer) is whisked away to a small island inhabited only by the parrot Tuesday (Kaya Yanar) and his animal friends. Although they are not enthusiastic about the newcomer at first, Robinson and the islanders become friends. Together they build a new home for the human, which is threatened by a danger that washed up on the island along with Robinson.

Robinson Crusoe leaves a somewhat ambivalent impression. Dramaturgically, the film falls rather flat, adhering closely to the pattern of previous Ben Stassen productions and offering relatively little depth. Visually, however, the colorful island adventure is a delight. Especially in the 3D version there are quite a few wonderful moments to experience. In many small details it also becomes clear with how much love and technical skill the creators have worked here. It is a pity that just with the screenplay just this was only conditionally the case.

But even if the primarily visually convincing, it offers just younger viewers enough humor and excitement to release the target audience to about 13 years enthusiastically from the cinema. It may be that this version of the popular adventure story is not a particularly good family film. But it is certainly an exciting and funny children's film. This is ensured by the lovable characters, who are charmingly brought to life not only by the animation team but also by the well-chosen dubbing actors. Whether it's Dieter Hallervorden as the old goat Zottel, comedian Kaya Yanar as the cheeky parrot Tuesday or TATORT commissioner Aylin Tezel as the porcupine Epi, they all help the animal island inhabitants quickly grow on young viewers.

The tension is relatively child-friendly implemented. But there are some scenes that might be a little too dark and scary for very young children. Therefore, a visit to the film is rather unsuitable for viewers under 5 years. But especially adventure fans between 6 and 13 years will have a lot of fun here, as neither the somewhat uninspired story, nor the rather flat gags will strike them negatively. And therefore, for the audience for which the film is made, a very clear: Worth seeing!