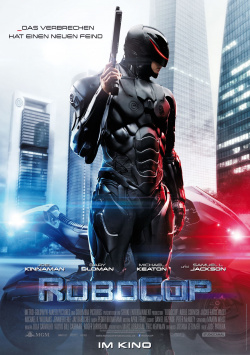 Remake fever has once again infected Hollywood. The latest victim is Paul Verhoeven's 1987 RoboCop, a film that was banned in Germany until recently, a brutal, cynical and extremely entertaining satire that has been significantly toned down for 2014 audiences. Although there are still some satirical elements, the remake focuses much more on the emotional, family-is-the-highest-goods side of the story.

When cop Alex Murphy (Joel Kinnaman) gets wise to some corrupt colleagues and their connection to a powerful crime boss, he is to be muzzled very quickly. But the attempt on Murphy's life doesn't kill the young officer, it only maims him beyond repair. This makes him the perfect candidate for a program run by defense contractor OmniCorp, who are desperate for a way to gain more acceptance among American citizens for the use of their defense robots. A mix of human and robot, presenting all the benefits of OmniCorp's machines with a human touch, seems like the perfect promotional tool. Convinced that she will lose her husband otherwise, Murphy's wife Clara (Abbie Cornish) agrees to OmniCorp boss Raymond Sellars' (Michael Keaton) offer to have his chief developer Norton (Gary Oldman) turn the badly injured cop into RoboCop. The only condition: his conscience and memories are to be preserved. But when these very things stand in the way of the project's unqualified success, Sellars decides to turn Murphy into a will-less fighting machine. But what is initially a phenomenal success soon becomes a real threat.

The 2014 model of RoboCop is not a bad movie in its own right. Jos&eacute; Padilha, director of the two excellent Elite Squad films, provides plenty of well-staged action sequences alongside a handsome glossy look - even if the first-person shooter look of one sequence is a bit annoying. But overall, you can tell that Padilha knows his stuff and has made an effort to not completely smooth out the rough edges of Verhoeven's film. In some moments he succeeded very well. Especially when Samuel L. Jackson as a TV host pillories the wimps in the government and promotes the use of combat robots in America, the film definitely reveals the satirical potential that also made up the original. But Michael Keaton's character also strikes into this very notch, giving the film something of a second layer behind the action facade that clearly does the overall picture good.

However, there is one point where this remake simply fails, and it doesn't work even if you're unfamiliar with Verhoeven's film. There, the brutalized Murphy was really just a machine, made aware of his humanity through brief snatches of memories of his family. That part of the story was hugely important, but it was handled comparatively subtly, which is exactly why it was so effective. In the 2014 version, Murphy as RoboCop is initially a human with all the feelings and memories. And he can't deal with that at all. Despite high-tech armor, this RoboCop is anything but cool, just a whiny whiner. Sure, when he gets to stand up to other combat robots in a test or keep law and order on the streets, he's pretty close to the RoboCop his fans know and love. But when he bursts into tears and despair at the sight of his wife or son, it's hard to really take him seriously. Bad memories of Darth Vader's Neeeeiiiiiiin from Episode III come to mind! That this RoboCop is a real family man is then really annoyingly taken to extremes in the finale. Here is of the wonderfully evil end, which Verhoeven's RoboCop prepares for his adversary, now really hardly something to feel.

What also seems a little strange, is that the violence in the film is indeed present and quite excessive, but so bloodless was presented that the film was even released in Germany from 12. And since this theoretically makes it possible for 6-year-old children to see this work in the company of their parents, one has to ask oneself here once again how much sense an institution like the FSK makes. Padilha's film may be much more harmless and slick than Verhoeven's RoboCop. Still, it's not a movie for kids, no matter how little blood there may be.

As I said, the 2014 RoboCop isn't really a bad movie, as long as it's not subjected to direct comparison with the 1987 film. But it's not really a good movie either, it just lacks the necessary rough edges for that. This work plays it too safe and is too pandered to mass tastes to even begin to achieve the same class that made Verhoeven's film such a beloved genre classic. If you just want to see stylish futuristic action with a bit of deep satire and even more sugarcoating, you'll be fine here. But if you're expecting a really cool action hero and more of the cynicism of the original, you'll want to send this RoboCop to the scrap press quickly. Therefore: only for RoboCop newcomers absolutely worth seeing, for fans of the original, on the other hand, only with clear restrictions to recommend!