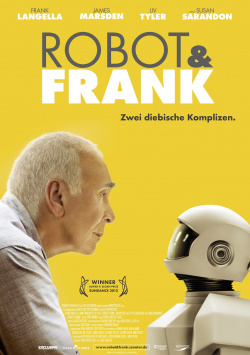 In a world where real books have all but disappeared, where only electric cars hum along the streets, and where robots have taken over most of the services of originally human caregivers, Frank (Frank Langella) feels completely out of place. He was once a notorious jewel thief. Today, the aging man has completely retreated to his secluded home. Since his son Hunter (James Marsden) is no longer up to the task of regularly visiting his stubborn father, he buys a robot caregiver to take care of Frank from now on. Frank doesn't like this idea at all, as he prefers to be alone when he goes for walks or visits the library of his beloved Jennifer (Susan Sarandon). But gradually Frank gets used to his new roommate and learns to appreciate his abilities as well. When the old library is transformed into a super-cooled scene-meeting place for wealthy yuppies, Frank wants to teach the arrogant young entrepreneur a lesson, for which his old skills are needed. Since they're a bit rusty, he's in desperate need of a partner - and he's quickly found one in his robot...

Robot & Frank is the directorial debut of Jake Schreier, who here tells an utterly charming story about growing older in an ever-changing world, enriched with quiet humor and plenty of original ideas. In doing so, Schreier skillfully mixes elements of classic rogue comedy with futuristic elements, a touch of social satire and understated family drama. The fact that this mixture works so well is due on the one hand to the unobtrusive staging, and on the other hand, of course, to the great performance by Frank Langella. The actor, who had great success as Dracula at the end of the 70s and reached a temporary peak of his career in 2008 with his performance as Richard Nixon, plays the former jewel thief, who is confronted with his increasingly weakening and unreliable memory, with mischievous wit and a lot of charm. As a result, he succeeds very well in winning over the audience's sympathies, which is extremely important for the course of the story and its emotional impact.

Another major plus point of the film is that Schreier manages to give the robot something like character and humanity despite its rather simplistic, very functional and machine-like appearance. This not only gives the unusual relationship between the old man and the machine a certain credibility. It also allows the emotional climax between the two to unfold its full power. But not only the titular relationship between Robot & Frank makes this tragicomic story so worth watching. It's also the way in which Schreier shows just how alien Frank feels in an increasingly fast-paced world, while his mind works slower and slower, that contributes significantly to the film's ability to work so well.

Because aside from the genuinely heart-wrenching finale, Schreier largely eschews excessive sentimentality in favour of humour and understated, yet very obvious, social satire. Robot & Frank stands out in almost every way from the crowd of films that have recently explored the subject of old age. It is a wonderful film that will not only appeal to the 50+ generation, but will also appeal to younger viewers who are open to quieter and more sophisticated arthouse entertainment. Absolutely recommended!!!