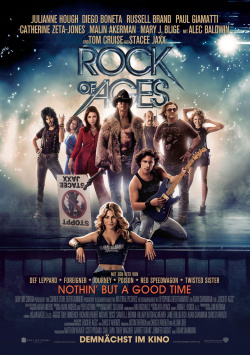 When small-town girl and music lover Sherrie (Julianne Hough, Footloose) comes to Los Angeles in 1987, all her dreams seem to come true after a somewhat bumpy start. She meets smart musician Drew (Diego Boneta, Pretty little Liars), who gets her a job at the legendary Bourbon Room on the Sunset Strip. The owner, Dennis Dupree (Alec Baldwin), is currently struggling with some serious problems. Because not only that the finances have not been right for some time. Now Mayor Mike Whitmore (Bryan Cranston) also wants to close the cesspool as part of his initiative to clean up the Sunset Strip, led by his wife Patricia (Catherine Zeta-Jones). An appearance by legendary rock star Stacee Jaxx (Tom Cruise) is expected to fill the club's coffers, ensuring its continued existence. But sleazy agent Paul Gill (Paul Giamatti), reporter Constance Stack (Malin Akerman) and, not least, an unfortunate misunderstanding between Sherrie and Drew all contribute to the fact that the lights may soon go out on the Sunset Strip forever...

Following the huge success of his musical adaptation Hairspray, director Adam Shankman has once again ventured into adapting a Broadway hit with Rock of Ages. The story of the five Tony Award-nominated jukebox musical is built around numerous '80s rock hits by bands like Bon Jovi, Foreigner, Poison, Whitesnake, Guns N' Roses, Journey, Twisted Sister, Extreme and Night Ranger. Therefore, for an unadulterated enjoyment of this wonderful good mood musical, it is essential that you like this kind of music and don't mind a very self-deprecating treatment of it and the time in which it was created. Even though some of the hits here are familiar to younger audiences through the series Glee, and the two leads appeal to those very audiences, the film as a whole can be recommended more to '80s rock fans of the 30+ generation.

Because the musical actually derives much of its entertainment value from its many references to the era of nasty hairstyles and dramatic rock ballads. Whether it's Russell Brand's Joan Jett memorial hairdo or the guest appearances, lasting only seconds, of '80s stars like Skid Row's Sebastian Bach, REO Speedwagon's Kevin Cronin, Extreme's Nuno Bettencourt or former teen starlet Debbie Gibson, such trivia greatly increases the already decent fun factor for connoisseurs of the era and its music.

The story itself, which has been slightly altered for the film adaptation, doesn't necessarily bristle with originality. The sleazy politician who likes to get his butt kicked behind closed doors, the upstanding Christian woman with a dark past, the good country girl who gets robbed as soon as she arrives in the big city are all admittedly pretty hackneyed clichés. But their rehashing is so entertaining that one is only too happy to overlook any form of predictability. Alone the way the well-known songs are perfectly woven into the plot is simply ingenious. The downright ecstatic version of Foreigner`s I want to know what love is, the wonderful use of REO Speedwagon`s Can`t fight this feeling or the rousing closing anthem Don`t stop believin` make the soundtrack a real highlight that sometimes makes it really hard to sit still in the cinema seat. (You can order the soundtrack CD for the film HERE).

But Rock of Ages would certainly be half as successful without its great cast, despite the great soundtrack and fun production. Whether it's Alec Baldwin as the aging club boss, comedian Russell Brand as his devoted sidekick, Paul Giamatti as a delightfully sleazy agent, Malin Akerman as a journalist who seems a little uptight at first, Catherine Zeta-Jones as the dogged mayor's wife or Mary J. Blige as the motherly strip-club owner, they all ensure that the fun is quickly transferred to the audience with obvious enjoyment. But the real star of the film is clearly Tom Cruise. His portrayal of the perpetually drugged up rock star who makes women fall over by the dozen with just one look is nothing short of awesome. Not only the fact that he still cuts such a fine figure at almost 50, but first and foremost his dismantling of a superstar idolized by Allen, spiced with a lot of self-mockery, makes every second that Stacee Jaxx is seen in the film a real treat. No matter what you may think of Tom Cruise as a person, as an actor he is beyond reproach here. And vocally he also fits perfectly into the role of the mass-appealing rocker with high sex appeal.

Against this concentrated star power, the actual main actors Julianne Hough and Diego Boneta admittedly remain a bit pale. It takes a little while to get used to them and their not-so-powerful voices. But as time goes by, the two fit well into the overall picture and it becomes clear that they deliver really good performances as well.

Rock of Ages is not sophisticated arthouse cinema and certainly not much of a challenge to the intellect. Instead, the musical is a fun movie of the best kind, a look back to the 80s infused with a lot of nostalgia and affectionate irony, to a world before iTunes and YouTube, when music had a very different status than it does today. Whether a younger target group will also be enthusiastic about the film is up to the viewer. But if you can still remember the numerous haircut sins, extensive visits to the record store or clubs like the Bourbon Room, you should definitely not miss these two hours of pure pleasure. And at the end, many an audience member will probably follow Drew's example and shout out loud: I want to Rock! Absolutely worth seeing