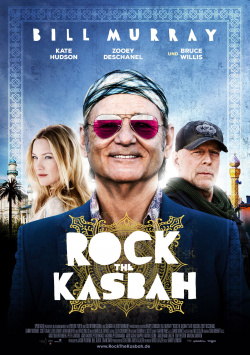 Music manager Richie Lanz (Bill Murray) has certainly seen better days. But he has by no means given up hope of hitting the big time. A tour for the US troops in Afghanistan with his new discovery Ronnie (Zooey Deschanel) should finally bring the breakthrough. But no sooner have the two arrived in Kabul than Richie suddenly finds himself without his star, without money and without a passport. Now, with the help of mercenary Bombay Brian (Bruce Willis) and two American arms dealers (Scott Caan, Danny McBride), he must embark on a dangerous deal to raise the money for his trip home. But in the Afghan backcountry, of all places, he meets a young local woman with a wonderful voice, in whom Richie immediately sees enormous potential. An appearance in the Afghan version of DSDS could make the girl an instant star. But to even get her to appear on TV, Richie must change not only the views of her strict religious father, but also those of the entire country.

When the great Bill Murray teams up with Good Morning, Vietnam director Barry Levinson, with support from Bruce Willis, Kate Hudson and Zooey Deschanel, to film a script from the writer of the cult comedy The Ghosts I Called, then really only something very good can come of it. And so the comedy Rock the Kasbah starts off very promisingly. You get the feeling that you're watching a wonderfully biting satire that only cares about political correctness to a limited extent. You lean back in the cinema seat and prepare yourself for almost 100 fun-filled minutes. And indeed, the first scenes then have some really good laughs to offer.

But then something happens that can not really be explained. The production loosens the initial bite, becomes increasingly uninspired and chaotic and leaves the viewer with just one big question mark at the end. What's the point of the whole thing? Is it a comedy, a satire, or maybe something like a drama infused with humor? Why do most of the actors act so incredibly listless? Why do some plot lines more or less fizzle out? And what is the story trying to tell us in the end? Rock the Kasbah isn't really bad, can be really entertaining in places. But somehow the movie isn't fish and not meat. There just isn't a coherent overall picture. Rather, it seems like a bunch of good ideas were thrown together here without the makers really knowing how to tie them together.

Additionally, Levinson's direction seems kind of indecisive. On the one hand, he strikes very biting, satirical notes. On the other hand, he doesn't seem to want to step on anyone's toes and rarely moves out of a politically correct comfort zone. There are moments when you just want to love the film. You wish the genius you see flashing here and there would finally fully erupt. But then the whole thing drifts back into an almost boring insignificance, which unfortunately dominates the overall impression in the end. Thus, Rock the Kasbah is so disappointing precisely because it becomes clear again and again how good the film could have actually been. But the result is just too messed up and too weak to live up to the potential of the story and its makers. And for that, in the end, it can only be given a Conditionally Worth Seeing

Cinema trailer for the movie "Rock the Kasbah (USA 2015)"
Loading the player ...