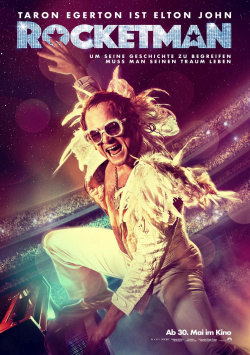 England in the wild but at the same time very prudish 1960s: Reginald Dwight (Taron Egerton) grows up as an ordinary boy in a suburb of London. The love that his father denies him, the unassuming boy finds in music. But as comfortable as he feels at the piano, he is not able to express his feelings in words. But then a fateful encounter takes place in London when Reginald meets the young lyricist Bernie Taupin (Jamie Bell). It is the beginning of a unique friendship and a musical collaboration that would lead to some of the greatest pop songs of our time. When Reginald changes his name to Elton John, the collaboration with Bernie quickly bears golden fruit. Worldwide number 1 hits, sold out tours and a rain of awards follow. With his music and his increasingly dazzling appearance, Elton John becomes the idol of an entire generation. But soon he has to realize: who flies high, can also fall low. And that also applies to the Rocketman.

After director Dexter Fletcher was already allowed to direct a few scenes of the mega blockbuster Bohemian Rhapsody, he now follows up with Rocketman: In this mix of musical and biopic, Fletcher pays tribute to the great Elton John. Taron Egerton, who has already appeared in front of the camera for Fletcher as Eddie the Eagle, was chosen for the lead role in close consultation with Elton John himself. The special challenge for Egerton was not only to look and move like Elton John, but also to sing all the songs of the master himself. And he meets that challenge with flying colors.

Because the film is more of a musical than a classic biopic, some of the songs have been completely rearranged to fit the context. For example, Goodbye Yellow-Brick Road becomes a very emotional dialogue between Elton and Bernie Taupin, or I want love becomes a desperate cry for help from a little boy who wants to be loved by his dad. This structure alone, and the way the songs are embedded as part of the story, sets Rocketman apart from films like Bohemian Rhapsody. The latter was accused of leaving out some particularly dark chapters of singer Freddie Mercury's life. That is not the case here, even if Fletcher fortunately refrains from an overly striking portrayal. In the US, this earned the infamous R-rating and in Russia, the film was even cut. Elton John himself commented, "Sorry, but I just haven't lived a life that's PG.

Visually, acting and of course especially musically Rocketman is great cinema. There's nothing to criticize. For me personally - who, by the way, is a big fan of Elton John - it lacked a very big emotional climax. While I had goose bumps during the Live Aid sequence of Bohemian Rhapsody, they didn't really come up here - only a little bit during the scene in which Elton composed Your Song, one of the most beautiful love songs of all times. But that's really complaining on a high level. Because for all that the film does right, the few minor criticisms are really only marginally noticeable. All in all, this musical love letter: Absolutely worth seeing!

Cinema trailer for the movie "Rocketman (Großbritannien 2019)"
Loading the player ...