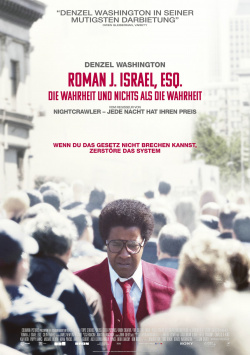 Roman J. Israel, Esq. - The Truth and Nothing but the Truth

For many years, Roman J. Israel (Denzel Washington) has worked behind the scenes in a small law firm, doing important paperwork and preparing cases. He has never tried cases himself. But when his partner falls gravely ill and the firm must be abandoned, the unassuming Roman takes a new job at a big firm. And his new boss, the ambitious lawyer Georg Pierce (Colin Farrell) throws Roman right into the deep end and puts him to work in court. Here, the headstrong Roman quickly starts to make trouble, and his job is soon on shaky ground. But then Roman gets information that puts his moral conscience to the test - and suddenly his previously simple life goes completely off the rails.

Roman J. Israel, Esq is the long-awaited follow-up to Dan Gilroy's acclaimed directorial debut Nightcrawler. Again, Gilroy has created an extremely interesting protagonist who gets to act in what is, at its core, a very interesting story. The only problem in this case is the script, of all things. Here, award-winning screenwriter Gilroy has tried to fit too much under one hat. The result feels like a somewhat sloppy patchwork effort, where individual elements are great but the cohesion doesn't quite work.

The critique of the US justice system is an extremely intriguing topic, and having a small-time lawyer from the background trying to revolutionize it is a really good idea. Also, the scene where Roman, as an old-school idealist, gets into clinches with young people frustrated by reality is also extremely strong, as you can kind of understand both sides. But the fact that Roman throws all his moral principles overboard at the first possible opportunity because of experiences like this just isn't believable. Even the consistent, if not really surprising, ending doesn't help much to iron out this shortcoming.

Roman J. Israel, Esq is still, overall, an entertaining film worth watching. But what makes it so disappointing in the end is that it could have had the makings of an excellent drama. This is made clear by Denzel Washington's extremely strong performance alone. Colin Farrell also plays much better than the script actually allows him to. In the really good moments of the story, which are then also carried by excellent actors, it becomes clear what potential was wasted in the end. But even if that sounds rather negative now, the entertainment value and the aspects about the Schwächend es US legal system are strong enough to justify a bottom line still worth seeing.

Cinema trailer for the movie "Roman J. Israel, Esq. - The Truth and Nothing but the Truth (USA 2018)"
Loading the player ...