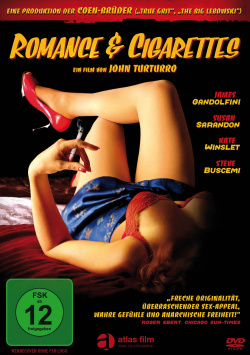 Movie: Actually, Kitty (Susan Sarandon) is convinced she has a harmonious marriage with her husband, construction worker Nick (James Gandolfini). But when one day a clear love letter falls into her hands, which Nick has written to a certain Tula (Kate Winslet), her perfect world collapses. Supported by her daughters (Mandy Moore, Mary-Louise Parker), she throws the unfaithful husband out the door and announces the end of their marriage. But Nick doesn't want to give up that easily - even though he is still unrestrainedly addicted to the seductive Tula. I guess there's only one thing left to do: sing!

Romance & Cigarettes boasts some big names: Oscar winners and cult directors Joel and Ethan Coen produced the film, directed by actor John Turturro, who was able to lure many great colleagues like Kate Winslet, Christopher Walken, Susan Sarandon, James Gandolfini, Steve Buscemi, Barbara Sukova or Mandy Moore in front of the camera. Nevertheless, it took seven years for the film to make its way to Germany. This may be due to the fact that the film actually defies common viewing habits in every respect. If ordinary musical films have a hard time finding a broader audience in Germany, a weird work like this will probably only succeed in winning over a small niche audience anyway.

But those who can get used to the admittedly somewhat over-the-top and theatrical production, could have a lot of fun with the film. For Kate Winslet alone as the highly vulgar Tula is simply delicious to watch and also the spontaneous song and dance interludes (in which Christopher Walken is of course again particularly wonderfully unconventional), give the film a very high entertainment value. Admittedly, not all of the characters work, some scenes are simply exhausting and when the film then takes a very dramatic turn in the final minutes, the whole thing almost seems a bit out of place. A harmonious overall picture doesn't really want to arise.

However, the film leaves a lasting impression. It's just different, wonderfully weird and unconventional and it features actors who are guaranteed to sing and dance through the sets not for the money, but out of friendship for the director and for the sheer joy of the material. And this good mood is absolutely contagious, which is why the film, which in many moments reminds of the works of John Waters, can be warmly recommended to lovers of the more quirky and unconventional arthouse cinema. But if you're expecting a typical musical or even a true romance, you'll be in for a surprise.

Picture + Sound: Apart from the fact that the contrasts seem a bit overdrawn here and there, the picture is quite convincing with its strong colors, decent overall sharpness and lack of smudges or major image noise. The audio, of course, is primarily dominated by the music and dialogue, which is mixed a bit front-heavy but sounds powerful from the speakers. Good!

Extras: As a bonus, there is unfortunately only the trailer to the film in German and English, as well as other program tips from the provider.

Conclusion: Romance & Cigarettes is a very weird musical with star cast, which defies common viewing habits, but friends of weird, colorful and quite original arthouse films can have their bright joy in the unusual goings-on. The DVD of the film, which was made in 2005, is technically well made, but disappoints in terms of bonus material. Nevertheless, there is at the end still a cheerfully sung: Recommendable!