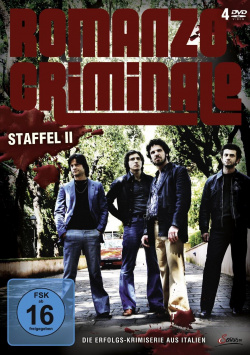 Film: The members of Rome's feared Magliana gang are in shock: their leader Pietro (Francesco Montanari), known as the Lebanese, has been shot dead. Dandi (Alessandro Roja), Freddo (Vinicio Marchioni) and the others swear revenge. For Inspector Scialoja (Marco Bocci), the primary goal now is to prevent further bloodshed among the criminal gangs, while his efforts to dismantle the Magliana gang and put all its members behind bars continue with unwavering determination. Although he manages to briefly imprison the Gemito brothers, who are believed to be responsible for the murder of the Lebanese man, and thus at least postpone an act of revenge, he cannot really prevent new violence. On the contrary, more and more of the gangs that the Lebanese man put a stop to are now setting out to reclaim their old territories. And there is also increasing tension between Dandi and Freddo. The end of the Magliana gang seems to have come - but organised crime in Rome is far from defeated.

The second and at the same time last season of Romanzo Criminale closes the story around the Magliana gang perfectly. While the first season was about their rise under the leadership of the Lebanese, the focus is now on their slow decay after his death. The increasingly difficult relationship between friends Dandi and Freddo takes on a central role. By showing in flashback at the beginning of the season how Pietro, Freddo and Dandi became friends as children, the increasingly dangerous tensions between them are given an enormously high level of intensity, which finally explodes in an extremely dramatic finale.

But Scialoja's unwavering desire to put the remaining members of the Lebanese's gang behind bars also adds to the tension and dramaturgical strength of the concluding episodes. For Scialoja's investigation is marred by his obsession with Dandi's girlfriend, former prostitute and current brothel boss Patrizia (Daniela Virgilio), which will ultimately have drastic consequences for him. Add to this the rivalries among the various gangs who, after the Lebanese's death, claim their old territories back for themselves, no matter the cost. All of this makes for a compelling atmosphere that is felt in the dialogue-heavy moments as well as the slightly more action-packed ones.

A coherent set, which especially towards the end has some amusing details such as the original shape of mobile phones to show, a consistently convincing cast, the good soundtrack and of course not least the dense production make the complete series an excellent, exciting and extremely entertaining Mafia epic, which lovers of the genre should not miss in any case. Absolutely worth seeing!

Picture + Sound: As with the first season, there are some noticeable weaknesses in the new episodes in the darker moments, in which sometimes strong image drizzle can be made out. The sharpness also leaves something to be desired in such moments. In the brighter moments, however, the picture convinces with a good color mix and a coherent overall sharpness. The sound, which in the German version is not only in stereo but also in a slightly more powerful Dolby Digital 5.1 mix, is dominated by the coherent soundtrack and the very frontally mixed dialogue, but also has a few good surround effects to offer during gunfights and other more action-packed sequences, which provide a bit of dynamics in the otherwise rather restrained action.

Extras: Additional material has also the second season unfortunately not to offer.

Conclusion:While the first season of Romanzo Criminale showed the rise of the Lebanese's gang in Rome, the second season is about their slow, bitter disintegration after the murder of their boss. In the end, the series comes full circle perfectly, creating an exciting, intensely acted and grippingly directed overall picture that makes it a worthy representative of the mafia genre. The shortcomings in the technical realization and the lack of bonus material only have a very minor negative impact on the quality of the content. Absolutely recommendable!