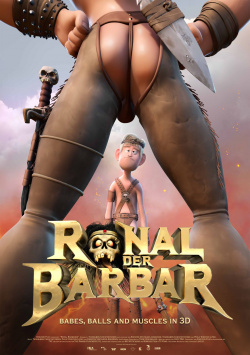 The Barbarians are considered the most dangerous and strongest race on Earth. In order to bring the ultimate evil to life and thus take power over the world, the evil Volcazar needs the blood of all barbarians still alive. And indeed, with a surprise attack, he succeeds in capturing the last barbarian tribe. Only the narrow-chested Ronal slips through his fingers. And so it is now up to the not at all barbarian boy to save his people. To do so, however, he must come into possession of the legendary sword of the barbarian god, for only its blade can defeat Volcazar. With the help of a rutting young bard, a pugnacious maiden, and a metrosexual elf, Ronal plunges into the adventure where he can prove to himself that he does have what it takes to be a true barbarian: balls!

Inspired by a 1981 record cover by the heavy metal band Manowar, Kresten Vestbjerg Andersen, Philip Einstein Lipski and Thorbjørn Christoffersen created the world of Ronal the Barbarian, where the motto Babes, Balls & Muscles would be brought to the screen in the form of a great fantasy adventure. The fact that the production involved the team behind Terkel in Trouble, a wonderfully wicked animated flick, initially raises hopes that Ronal the Barbarian will also be similarly irreverent and wicked in its treatment of the fantasy genre and genre works like Conan the Barbarian. But unfortunately, this hope proves to be a fallacy.

Some action sequences, especially during the finale, look pretty damn good and a handful of gags work really well too. But the rest, unfortunately, is extremely shallow and focuses on flat sex jokes and raunchy dialogue. Especially bard Alibert is annoying after a few moments with his permanent horniness and his stupid sayings - and unfortunately this doesn't really change much until the end. There are a few good moments, for example with the Amazons, whose leader was obviously modeled after Brigitte Nielsen, or with the completely incompetent Elf. But the really funny or even clever moments are clearly in the minority.

Admittedly, the filmmakers don't even make an attempt at any second to hide what kind of movie Ronal the Barbarian is. Even the movie poster clearly sets the accent below the belt. It's just a shame that in favor of really embarrassing gags, the chance to stage a wicked and genuinely funny animated adventure that has more to offer than hundreds of masturbation , dumpling and boob jokes was passed up. It may be that the German dubbing still messed up a lot here, but it can be assumed that the original Danish version doesn't have a much more intellectual joke to offer either.

Except for the very amusing end credits, which offer a very special homage to a super hit by Queen, and a few good gags and felicitous action sequences, Ronal the Barbarian falls far short of its potential and only offers good entertainment to viewers who can laugh primarily at jokes set in the lower body regions. The 3D effect can also only occasionally please and proves to be rather unnecessary overall. So the bottom line is: only for barbarians who are quite tough, just worth seeing!

Cinema trailer for the movie "Ronal the Barbarian (Dänemark 2011)"
Loading the player ...