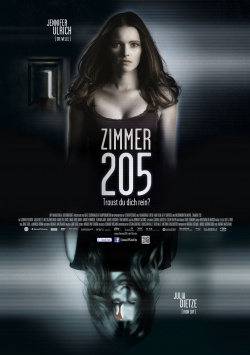 Although her father (Hans Uwe Bauer) thinks it is still too early and she is still dependent on medication due to her mental instability, 19-year-old Katrin (Jennifer Ulrich) finally wants to lead a normal life. With the start of her studies, a new, happier phase of her life is to begin. And so Katrin moves into her rather shabby room in the student dormitory full of euphoria and is delighted to make a nice acquaintance with the attractive Christian (Daniel Roesner) on her very first day. But soon dark clouds gather over Katrin's new life. After a one night stand with Christian, she has a seizure during which she is haunted by visions of an eerie figure in a red jacket. What she initially blames on an unfortunate mix of ecstasy and psychotropic drugs won't let her go in the days that follow. And somehow the visions seem to be connected to her previous tenant Annika (Julia Dietze), who disappeared overnight a year ago without a trace. Katrin sets out to find answers, but only encounters a wall of silence from her new flatmates. Then, when a tragic death occurs, events take on extremely dangerous proportions for the young student.

Room 205 actually deserves high praise for being the rare case of a horror thriller from Germany. Far too rarely do German filmmakers dabble in this genre, which is given much more attention in countries like the US, France and England. Therefore, it is always pleasing when German genre cinema is enriched by another contribution. Director Rainer Matsutani also obviously tries to offer horror fans exactly what they want to see: an attractive heroine, a few original death scenes and a surprising ending, all of which Zimmer 205 has to offer.

So Jennifer Ulrich, who already cut a good figure in the vampire thriller Wir sind die Nacht, proves to be the film's very big strength. And also the dark atmosphere, which Jan Fehses camera work supports, ensures in some moments that room 205 does not need to shy away from the comparison with international horror thrillers. This all actually sounds very good and like a real goosebump guarantor. The problem is that the film has not only positive moments, but at least as many negative aspects to offer. The biggest problem are the countless clichés that are used in the script. This begins with the character drawing, which is particularly disturbing with the clique bitch Sanne (Marleen Lohse) and with Commissioner Urban (Andr&eacute; Hennicke). These two characters in particular are drawn in such a template-like fashion that it's almost unintentionally hilarious. The same goes for some of the plot twists, which are so predictable for genre connoisseurs that any existing spark of suspense is nipped in the bud as a result.

Sure, the film has its effective moments where it's suspenseful, surprising, and entertains well. But these scenes are repeatedly overrun by moments that lack any originality or soul of their own. So in the end, you are left with a very ambivalent overall impression. Because Zimmer 205 is a praiseworthy and committed attempt at a German horror film, which is only really successful in places. The too inflationary used clichés and the in parts a bit thin script prevent that the tension can build up and that the shock moments can unfold their full power. All in all, this is a decent genre movie, but not as good as it could have been. Only worth seeing with significant deductions!