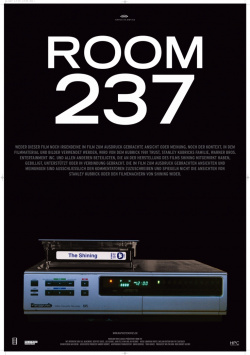 Although the film has received a lot of criticism from fans of the original novel, Stanley Kubrick's Stephen King adaptation "The Shining" is considered one of the great milestones of the horror genre. On the surface, the film is a classic ghost story about a man who falls into insidious insanity in a remote hotel. But if Kubrick was known for something, it was for the fact that his films only reveal their different levels of meaning at a glance beneath the surface. And so there are also several treatises on "The Shining", ranging from purely film-scientific discussions with visual language, symbolism or camera technology to absolutely absurd conspiracy theories.

In his documentary "Room 237" director Rodney Ascher lets five admirers of the director have their say, who have their very own ideas about what Kubrick's version of "The Shining" is really about. The award-winning journalist Bill Blakemore, the author and Professor Geoffrey Cocks, the dramaturge Juli Kearns, the author/editor/radio presenter and former video librarian John Fell Ryan and the author and filmmaker Jay Weidner explain in detailed statements what messages, symbolism, psychological and cinematic levels they believe they have found in the horror classic. It's about the truth about the fake moon landing, which Kubrick himself allegedly directed, about a prosecution of the director against the American government concerning the treatment of the American natives, about sexuality, about the Nazi regime of the second world war, about the Nazi regime of the second world war. The film is about a big "Fuck you" in the direction of Stephen King, the model of which has been clearly changed in several aspects by Kubrick.

Ascher has chosen a very unusual style of staging for his documentary. All his interview partners always remain hidden. Her theories are placed as voice over commentary on a collage of film excerpts from "The Shining" and other films, primarily the works of Kubrick. This has its charm at the very beginning, but since some sequences are constantly repeated throughout the film, there are certain signs of fatigue that can't change even the most passionate statements of the five interviewees.

However, the biggest problem of this documentary lies in a fact that is never mentioned in the film. Because many of the scenes to which the theories expressed here refer originate from a version of the film that Kubrik cut especially for the American market. The international version is 23 minutes shorter. But if, as the theorists here assume, every moment, every picture is of such significance and full of hidden symbolism, why did a perfectionist like Kubrik simply cut it out like that? Why could the film in Kubrick's eyes gladly do without these scenes? The fact that none of Ascher's interviewees goes into these two versions of the film takes away some of the film's credibility and persuasiveness. The second problem that arises from this is that viewers outside the USA are not familiar at all with many scenes that are analyzed here in detail, since probably only a few film fans are familiar with the American long version.

And so the suspicion is confirmed that all these passionately presented theories are pure spinning, which is quite amusing right at the beginning and also comprehensible to a certain extent. But for almost two hours the staging style and the rather hair-raising analyses are simply too dry, too bulky and too boring to captivate even passionate film theorists, Kubrick enthusiasts and great admirers of "The Shining" - like the author of these lines.