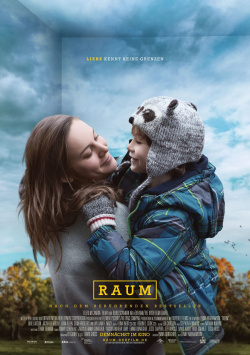 5-year-old Jack (Jacob Tremblay) lives with his mother Ma (Brie Larson). She tries everything to offer her beloved child as happy a life as possible. She plays with him, celebrates everyday rituals, reads to him and baths him. But there's so much Ma can't offer him. Because the two of them are trapped in a room measuring only 9 square meters. This is where Jack's been living since he was born. He doesn't know anything else, the outside world is completely alien to him. Even though Ma managed to create an entire universe in a very small space for her little boy, she notices that he is beginning to ask more and more questions about what is outside of "space". She knows that she must act now if she wants to free herself and her son alive from this prison. She plans a risky escape attempt, not suspecting how frightening the world out there could be for her and Jack after all these years of isolation…

With "Space" director Lenny Abrahamson has created an extremely intense, challenging film that grips its audience and doesn't let go so quickly anymore. The film doesn't manage this with a striking depiction of violence, but in a very subtle, calm way. With this restraint he impressively succeeds in clarifying the horror Ma has to live through and at the same time shows how their sacrificial love has preserved the boy's childlike fantasy in this prison as well, so that together they have created their own little world in which Jack can experience something like a happy childhood. Even though her tormentor may have mentally broken her, Ma wants to do everything she can to prevent Jack from doing so.

Brie Larson has rightly been awarded an Oscar for her role as the young mother who defies all mental tortures to save her son in every conceivable way. That honor should have been bestowed on her co-star, though. What the 8-year-old actor delivered here at the time of shooting is really great cinema. Tremblay's game seems absolutely authentic and especially in the scene of his escape attempt extremely intense. With the boy's talent, one can only hope that after a few years in the business he won't suffer the same fate as so many child actors.

The perfectly orchestrated interaction of director and actors with a sensitive hand gives the already rousing story an enormous emotional impact. Precisely because Abrahamson's production never really presses firmly on the tear gland and resists any temptation to let the whole thing degenerate into an audience-effective stirring piece with conventional kitsch and pathos, the effect of the film can unfold with all its strength. The result is a drama that viewers won't soon forget. It's not a light entertainment film, but a challenging fare that gets under your skin. You have to be able to get involved in that. Those who succeed in doing so will be offered one of the strongest cinema dramas of the year. A great work that impressively proves how powerful even very small films can be. And there's one for that, of course: Absolutely worth seeing!

Cinema trailer for the movie "Room (Irland/Kanada 2015)"
Loading the player ...