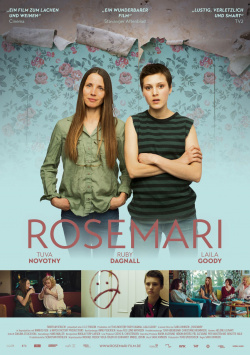 During her wedding party, Unn Tove (Tuva Novotny) discovers a newborn baby in the restaurant's toilet. There is no trace of the unknown mother. The young bride hands the child over to the authorities. Many years later, the two meet again. Rosemari (Ruby Dagnal), now 16, is desperately searching for her birth mother, even though her foster parents are sacrificially caring for her. She hopes to have found her mother in Unn Tove. When she learns that she only found Rosemarie, but did not give birth to her, a world collapses for the girl. But Unn Tove, now divorced and a successful journalist for a local radio station, offers to help her in her search. Together they follow the few traces that can still be found after so many years. What they find could not only completely change the girl's life, but also sheds a whole new light on life choices that Unn Tove begins to question more and more.

The Norwegian/Danish/German co-production Rosemari is a very beautiful story of two people whose lives are closely connected by chance. It is a stirring search for answers in the past, to heal old wounds and pave the way for the future. With a lot of slow-paced action, a bit of humor, and emotions that seem authentic, director Sara Johnsen successfully executes the interesting premise in her fourth feature film. Sure, some moments feel a bit drawn out and contrived as well. But overall, this easily digestible drama can leave a positive overall impression - not least due to the fact that the resolution of the story can actually surprise.

The film is carried by two very good leading actresses. Tuva Novotny, known in this country for films like A War, Eat, Prey, Love or Jalla! Jalla!, plays the love-disappointed journalist just as excellently as new discovery Ruby Dagnal, who skilfully prevents the rebellious Rosemari from turning into an overly clichéd teenager. The really well-drawn characters also save the film over its weaker moments, which is especially helpful in the final act. Because without an emotional connection to the characters, the finale would nowhere near be able to unleash the power that this crucial twist in the story has.

Rosemari is a small, unagitated and quiet, yet engaging, entertaining and moving film. A clear recommendation for all who like Nordic cinema of the understated kind. Worth seeing

Cinema trailer for the movie "Rosemari (Norwegen/Dänemark/Deutschland 2016)"
Loading the player ...